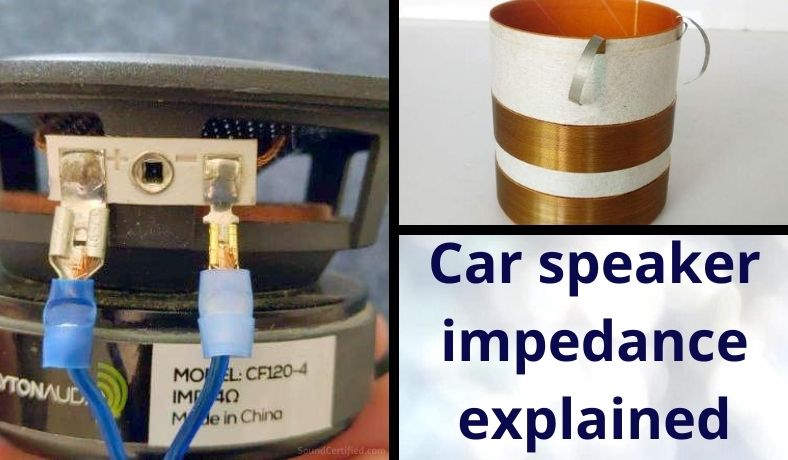 Impedance is kind of a “scientific” sounding word, right? At first glance it’s fairly confusing and you might not know how much – if at all – it matters for hooking up speakers.

But what is car speaker impedance? As it turns out, it’s really important and can have some serious consequences on your vehicle’s sound, your car amplifier, and more. Let’s dig in!

This article is part of the car speaker main page.

Unlike straight wire that goes from point “a” to point “b” when you hook up power, the voice coil’s wire winding forms a loop that has an electrical property called inductance. Inductance is a bit different from resistance as it changes as the frequency changes. This is called inductive reactance.

For car speakers, this means that the real impedance (the total resistance) actually changes a little bit as music plays! However, the good news is that we can still categorize car speakers according to an Ohms rating since it’s always pretty close.

When we talk about the impedance of a speaker, most of the time people are referring to the category (general range) of the speaker as used to match home or car stereo amplifiers.

In the electrical world, Ohms are sometimes represented by the Greek symbol Omega, or “Ω.” 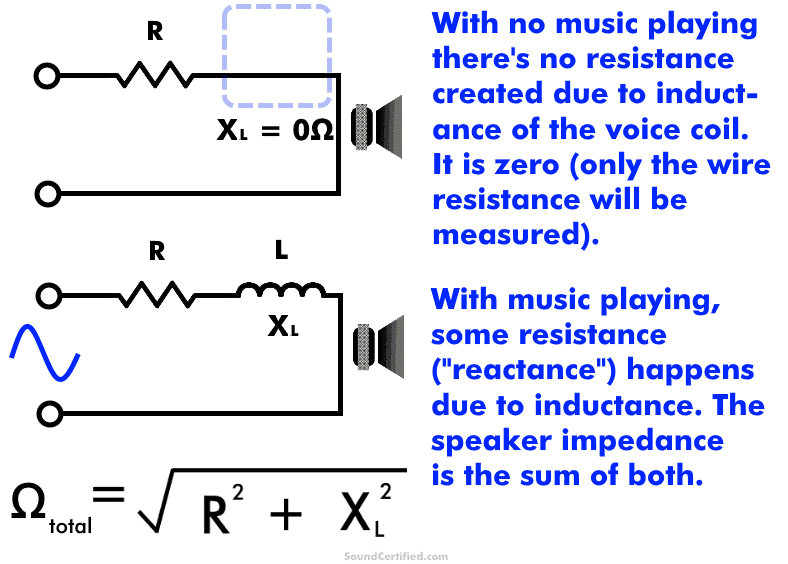 How to calculate the total impedance (if you like!)

How to tell the impedance of a car speaker 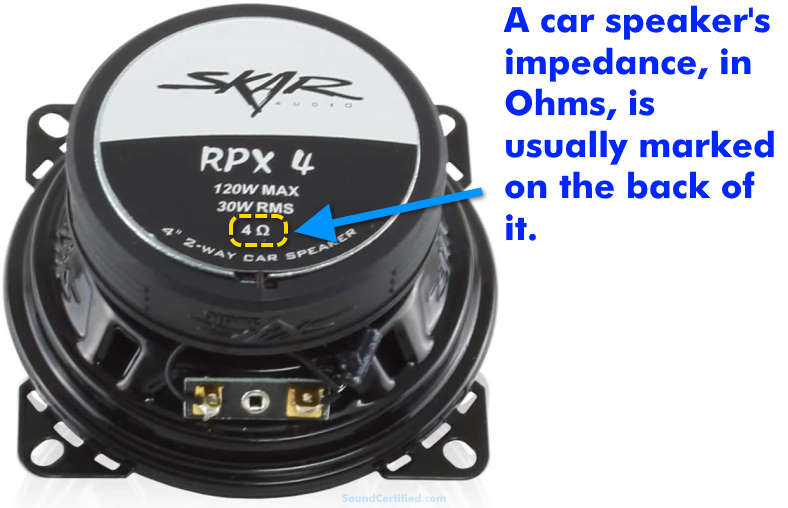 There are a few different ways to tell what a car speaker’s impedance is – even if it’s missing the label or it’s not printed on it anywhere.

Here’s what you need to know:

Long story short, if your speaker doesn’t have the impedance listed anywhere or you can’t find the manufacturer’s specs, the best thing to do is to measure it.

That’s the best way as you can be 100% sure of what you’re dealing with – especially if you need to match the impedance to an amplifier, car stereo, or crossover.

How to measure the impedance of a car speaker 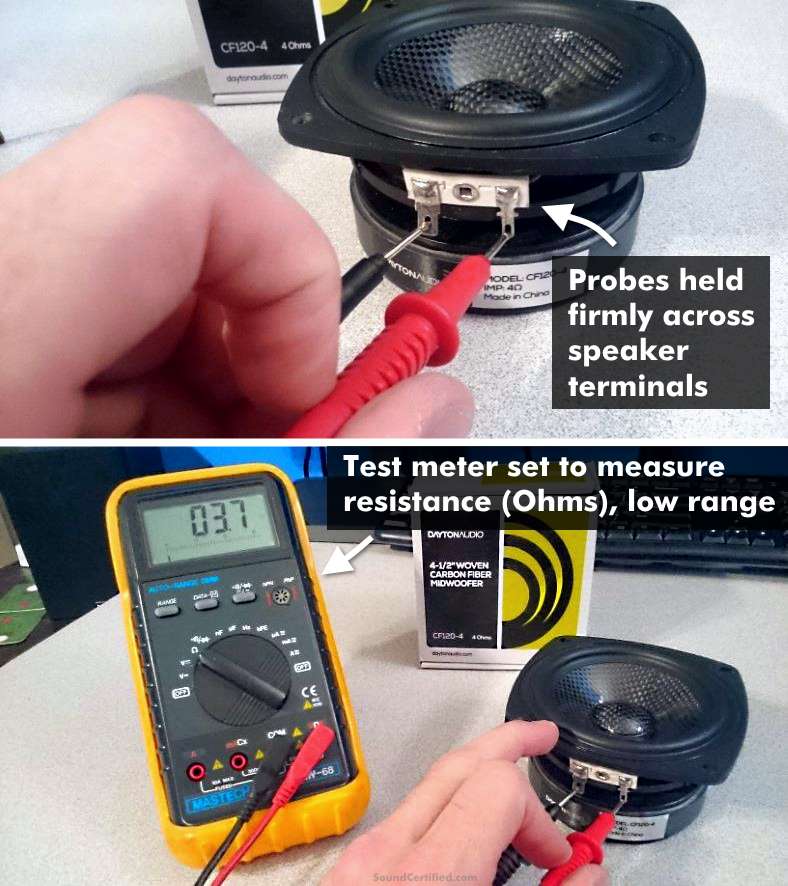 It’s easy to measure car speaker impedance using a test meter set to read resistance (Ohms). Once you get a reading you can tell what Ohms rating your speaker is.

To measure the impedance of a car speaker you’ll need a multimeter (test meter with multiple functions) or a dedicated Ohm (resistance) meter. Digital multimeters are inexpensive and easy to find these days so I recommend using one of those.

As I mentioned above, the goal here isn’t to try and measure the perfect impedance rating.

Remember that you won’t measure exactly 4 ohms, 8 ohms, etc. You’ll measure an Ohms value that’s close to that and will help you tell the actual Ohms/impedance range of your speaker.

Note: Speakers like tweeters with a capacitor  crossover connected to them will act as an open circuit and will interfere with your measurement.

See my notes below on how to deal with that.

How to set your test meter for measuring car speakers 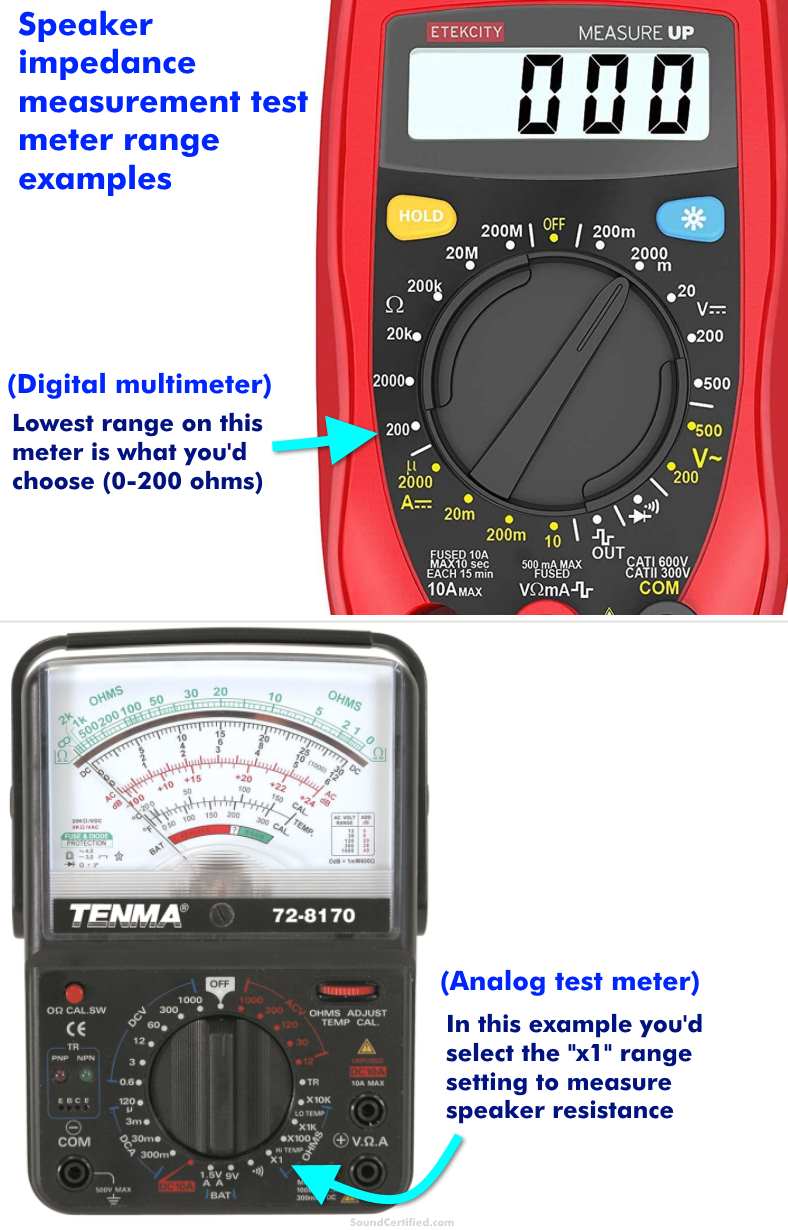 Shown are some example test meter resistance range settings to use for typical test meters.

As I mentioned earlier, it’s important to use the correct resistance range on your meter when measuring speaker impedance. that’s because the wrong setting may display nothing or give you the wrong idea that perhaps the speaker is blown when it isn’t.

If you’re not sure, check the test meter’s manual. Many modern digital meters often have an auto setting that will automatically adjust for the Ohm measurement it detects and will display the reading & decimal places accordingly. Other meters require you to select the correct range manually.

As a general rule, use the lowest range that includes 0-10 ohms (or similar).

Tweeters often are supplied with a high-pass crossover in the form of a capacitor. To get a correct reading you’ll need to disconnect it or measure around it. Be sure to disconnect the tweeter from an amp or head unit!

Measuring the speaker impedance where crossovers are in place is a problem. That’s because capacitors, which are commonly on tweeters as a high-pass filter, appear to behave like an open circuit when measuring resistance as the capacitor charges.

You’ll want to measure around the capacitor if used or disconnect one capacitor lead or one tweeter wire.

For 2-way speakers, there may or may not be a crossover used on the woofer. Often there’s an inductor in series with it. The good news is that directly reading resistance across a speaker and an inductor doesn’t make much difference – inductors have a tiny resistance value.

In fact, they’re usually in milliOhms (thousandths of an Ohm) which is almost nothing. However, as a general rule, it’s best to disconnect speakers from their crossovers before measuring Ohms.

To use this chart, take the speaker resistance measurement you got from your test meter reading and use it to compare to the measurements here. Your car speaker should fall into one of the common ranges you see above.

*This is an approximate range and should cover nearly all speakers but may vary slightly.

**1 ohm is rare but can be found in some car stereo products such as Bose premium amplified systems. 16 ohm speakers may sometimes be used for home or guitar amp systems, but aren’t very common.

Can I hook up 8 ohm speakers to a 4 ohm amplifier or radio? 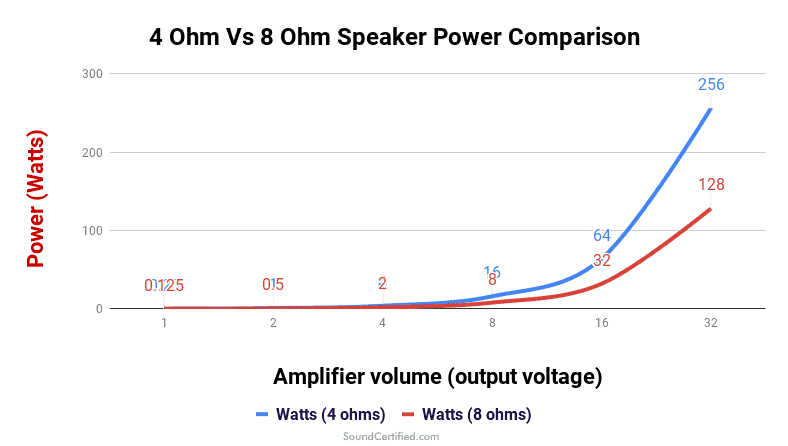 Using a speaker that’s not properly matched to an amplifier or car stereo can have minor – or major – consequences.

Using an 8 ohm speaker in place of a 4 ohm won’t hurt anything. However, it can only develop 1/2 the power output of a 4 ohm speaker meaning lower volume. It also won’t work properly with speaker crossovers since it will shift the cutoff frequency.

Car amplifiers & car head units don’t have much supply voltage to work with unlike home stereo receivers and amps. That means they need a lower impedance speaker to develop the same amount of power by letting more current flow.

I also don’t recommend mixing 8 and 4 ohm car speakers because they won’t have the same volume level once you turn up the volume. That means the sound won’t be right and you’ll be left having to deal with some sound frequencies being poor after a certain point.

Traditionally 8 ohms are used for home and some theater speakers. 4 ohm speakers are generally used for car use, with some 2 ohm models used at times (usually subwoofers).

In fact, car stereos can only put out about a measly 15-18 watts RMS per channel, despite the exaggerated peak power ratings you may see in advertisements. That’s because they can only work with a 12V supply to develop power across a speaker.

Car amplifiers are able to deliver huge amounts of power to 4 and 2 ohm speakers by using an internal power supply that generates higher voltages for amplifying the speaker signal. Without that, it wouldn’t be possible to drive car speakers with tons of power to get boomy bass like many people enjoy.

When are 2 and 1 ohm speakers used? 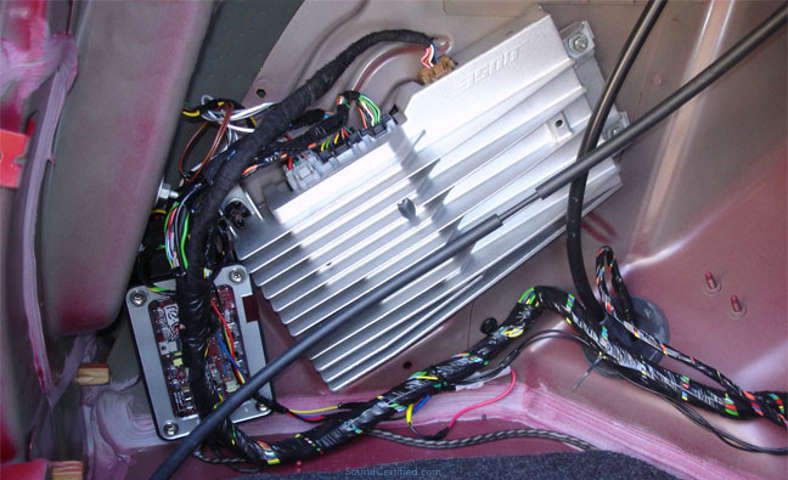 Factory-installed amps sometimes use 2 or 1 ohm speakers to develop more power without spending the money on amplifier designs using an improved power source.

2 and even 1 ohm (yes, 1 ohm!) car audio speakers are rarely used except for car subwoofers and some special cases for main speakers. Some factory-installed premium amplified car audio systems use lower impedance speakers to “cheat” using a “real” amplifier and save money.

That’s because they use the 2 or 1 ohm speaker to develop more power at each speaker without having to supply an amplifier with an internal power supply as is normally done. While it does technically work, it’s not a substitute for simply using a proper amplifier.

They introduce other problems, like not being compatible with standard 4 ohm speakers when it’s time to upgrade or replace faulty ones. They also still can’t produce as much power as a decent aftermarket amp can with 4 ohm speakers, meaning you’ll still end up needing to replace them. 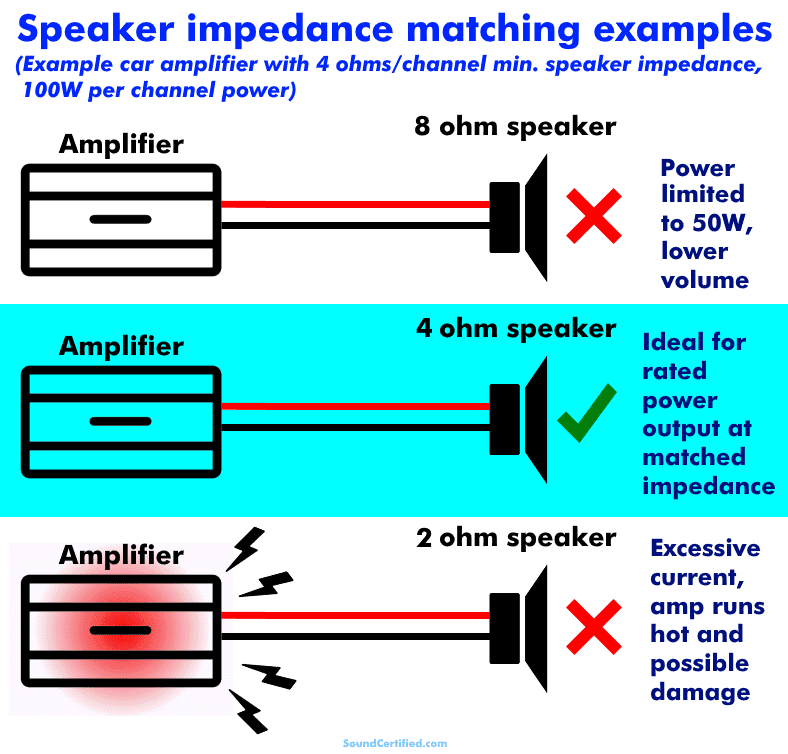 In order to get the most enjoyment (and power) for your dollar – along with avoiding damaging audio electronics – it’s important to match the speaker impedance (impedance load the amp sees at its output).

Here are some simple reasons to help you understand what happens when you don’t:

While in some cases an amplifier might be able to shut itself off before it becomes damaged when a lower speaker impedance is used, don’t ever assume it will. Sometimes the damage still happens and you’ve just ruined an amp.

Most car stereos don’t have any type of overheating or high-current self-protection circuitry built-in so they’re likely to have their output stages destroyed.

It’s a little bit different when we’re talking about car audio subwoofers, but the same rules hold true. Since a subwoofer channel on an amp usually has a lot power output on tap it’s not always an issue when using say a 4 ohm sub vs a 2 ohm sub with a 2 ohm min. amp.

However, as a general rule, it’s best to match the subwoofer impedance to get the power you’re paying for.