Need to figure out how much your L-pad or speaker resistors are reducing speaker volume?

My reverse L-pad calculator will let you easily find the decibel (dB) attenuation using only the resistor and speaker Ohms. Simple & clear instructions are provided.

I’ve also added a handy power rating function, too. Be sure to check out the additional tips as well!

Note: Javascript must be enabled in your browser to see or use the tool. 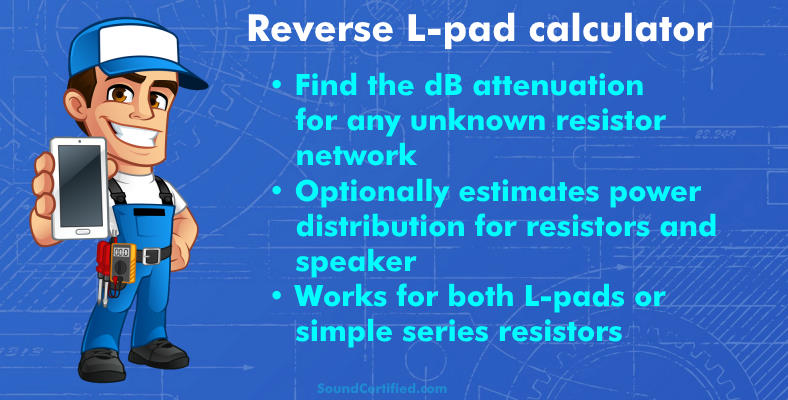 HOW TO USE THE REVERSE L-PAD CALCULATOR

Enter whole numbers (2, 5, etc.) or decimal values (6.3Ω, etc.) for Ohms as needed. If using the power option, use the RMS or continuous power rating in whole Watts for your amplifier or stereo. “Peak” or “maximum” ratings are misleading and will give the wrong results.

How does an L-pad speaker attenuator work?

An L-pad network reduces the voltage & power to a speaker, reducing its volume output. This is usually done with either fixed value resistors network or an adjustable L-pad you can buy. Both do the same thing but adjustable L-pads use a potentiometer (variable resistor) to make increasing or decreasing speaker output easy.

In an L-pad network, a series resistor reduces the voltage the speaker receives. A carefully chosen parallel resistor is connected to the speaker so that the total Ohms load seen by the stereo or amp is the same as the speaker itself.

Tweeters typically have a higher sensitivity (volume output rating for their power received) than woofers and midrange speakers. They’re more efficient for several reasons, one of which is their smaller cone or dome, lower mass they have to move, and so forth.

Woofers (especially ones with a heavy, stiff cone) require more electromechanical force, and therefore more power, to move the cone and produce sound. Because of their higher output, tweeters can sound too “bright” or “harsh” due to our ears being more sensitive to higher frequency audio signals.

You can say that in many cases woofers or midrange drivers and tweeters are mismatched. Let’s use a common example when building a 2-way speaker system:

That’s a difference of roughly 5 dB depending on how they’re measured. Although 5 dB isn’t a huge difference, it can have an impact on the sound and make tuning your system harder. Also, because speakers don’t have a perfectly flat frequency response, there are bound to be some “peaks” in the output which you’ll hear on top of the difference already there.

Taming a speaker that’s too bright can make a nice difference before thinking about using a fancy equalizer or other sound adjustments.

Why not just use a series resistor?

A series resistor can be used to reduce speaker volume in some cases. However, the problem with adding a series resistor alone is the total speaker load seen by a crossover will increase.  This change of speaker Ohms load causes crossover shift, resulting in poor sound.

That’s because a speaker crossover is designed for a specific speaker impedance to be connected. Increasing the speaker load (total speaker Ohms) affects the frequency behavior of capacitors and inductors in a crossover, causing the original crossover point to change.

Let’s say we have a speaker crossover designed for 8 ohm speakers:

The cutoff frequency will shift (move), meaning there can be unwanted gaps in sound due to their no longer being an overlap between the speakers.

You can remember this rule of thumb for speaker crossovers – the crossover frequency changes inversely with the speaker Ohms load:

By using formulas to create an L-pad, we can have the best of both: we can reduce the dB output of a speaker and still maintain the same speaker Ohms load an amp, stereo, or speaker crossover needs. 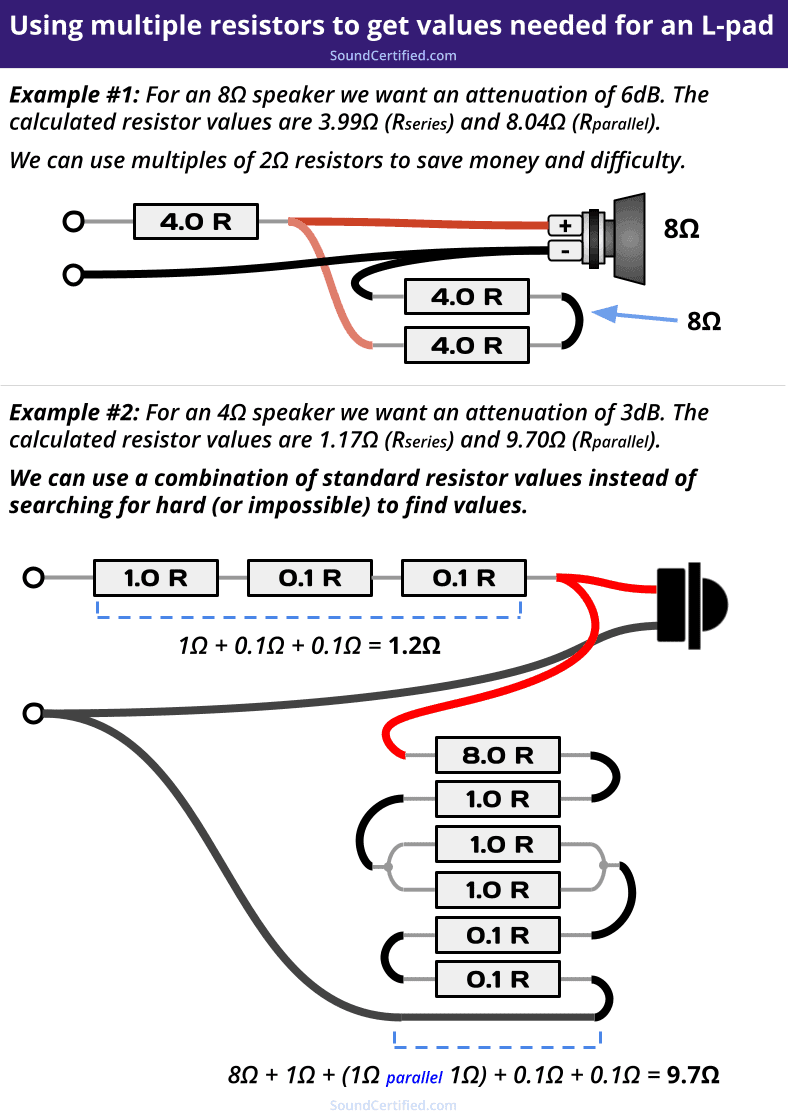 We need a 9.7 Ohm resistor which you won’t find anywhere – what can we do? The great news is that we can use easily found standard part values to get the same result:

*Note: The symbol “||” can be used to represent “in parallel” for engineering math purposes.

Here are some helpful tips for building an L-pad or working backwards from existing parts values:

In my experience, it’s a lot easier to use a combination of resistor values instead of spending time and effort hunting down specific part values. So when working in reverse from an existing L-pad or other speaker resistor design, be aware of what you might run into.

If you’re modifying an L-pad or building your own, a great idea is to use a project enclosure like an ABS plastic project box. Those can be found for a good price from places like eBay, AliExpress, and others.