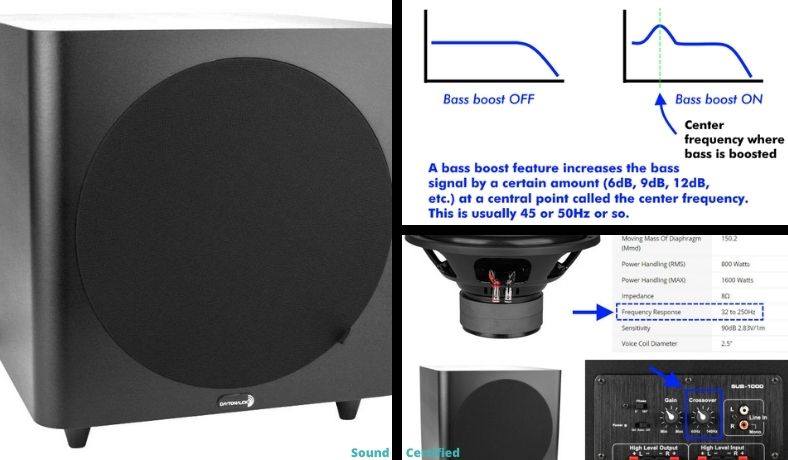 Getting that sweet bass sound really isn’t so hard if you know the basics. The right low pass frequency can make a big difference!

In this article, I’ll share what you need to know along with some other helpful info, too!

What should I set my subwoofer low pass filter to? 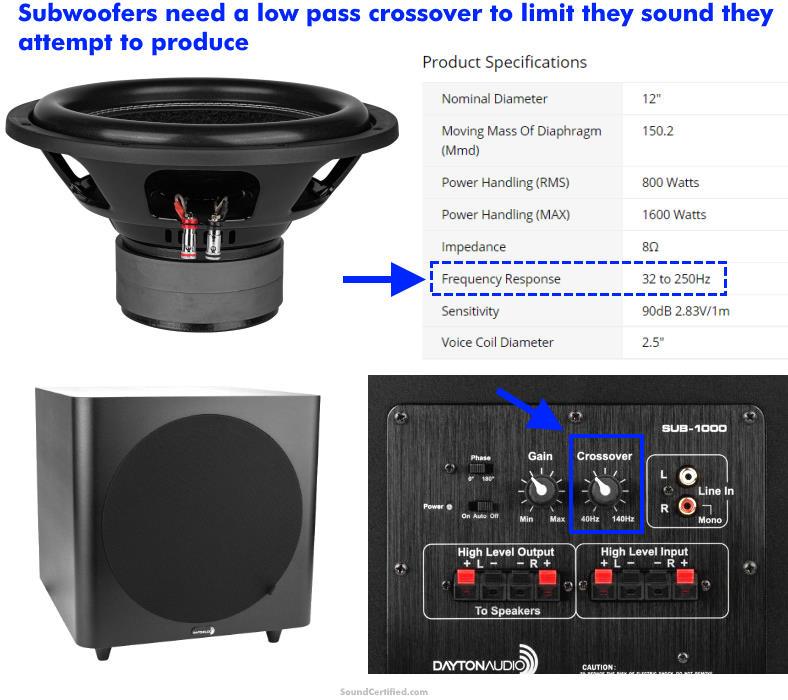 A subwoofer has a specific range of sound it’s best suited for – pretty much only low-end bass in most cases (this is true for both a home or car audio system). That’s because the cone size is large enough to produce bass audio waves well unlike smaller speakers.

Likewise, a subwoofer (in most cases) is poor at producing high frequency audio in music like vocals or treble due to its limited frequency response. We want to prevent that from happening so choosing the correct cutoff frequency is important. 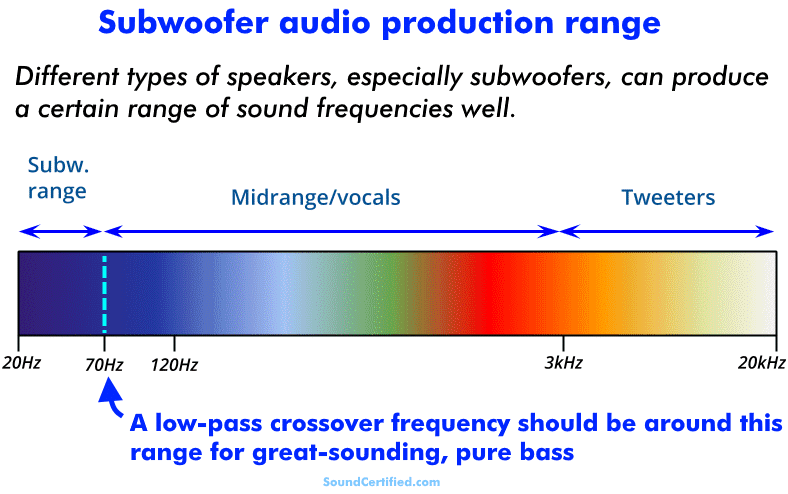 A good rule of thumb for a home stereo subwoofer low pass filter (LPF) setting is 70 to 80Hz. Once you’ve set it, adjust slowly and listen for what sounds the best to you.

Ideally you’ll have only pure, clean bass from the subwoofer and hear music or movie sound without any gaps in the audio signal (no areas where bass seems lacking). In some cases, you may need to increase the gain on a powered subwoofer if the level seems too low.

A home receiver’s low frequency effect (LFE channel) output may have some different modes that depend on the mode. Some have a fixed cutoff frequency (especially for surround sound mode) or may offer an adjustable lowpass filter for stereo music playback.

Should I use a high pass filter for my main speakers?

It’s not always necessary but sometimes can help prevent having too much bass. Not all main speakers for a home receiver or home theater receiver can produce bass well. For those that can, it’s possible you’ll end up with “boomy” bass when both your subwoofer and the main speakers are producing it.

In that case, if your amp or receiver has a high pass filter (HPF) option, 60 to 80Hz is often a good choice. It’s always worth trying out to see how it sounds to you as there are so many thin

gs that affect the sound, including the room, carpet vs hardwood floors, and much more.

The same rules also hold true more or less for a car audio system as well. 70 to 80Hz is usually a great choice. As small speakers (especially those installed in a car or truck dashboard or doors) are usually pretty bad for low frequency sound, a high pass crossover can help reduce distortion and provide better sound.

For example, in addition to the low-pass filter for your subs, using a high-pass filter set to about 56-60Hz for the front speakers will prevent them from distorting heavily especially at higher power levels. This also means you can drive them harder for more volume. 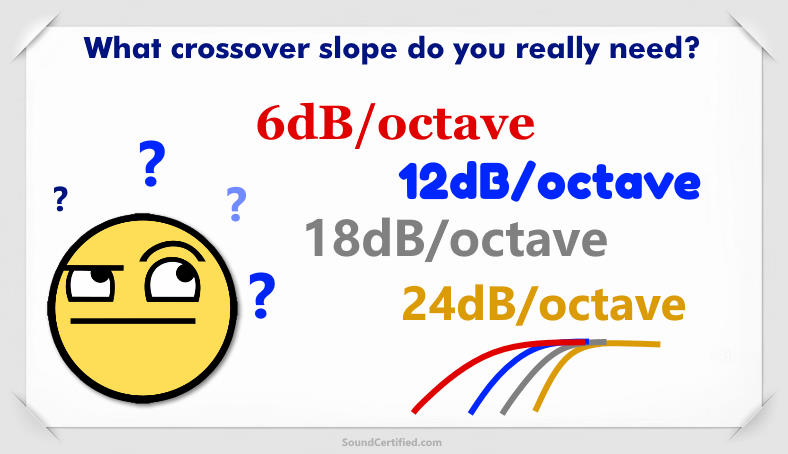 A crossover slope is the steepness of a crossover’s filtering ability. In other words, it’s how effective it is at reducing sound frequencies beyond the crossover frequency point.

Slopes, just like the crossover frequency, are categorized in terms of decibels (dB) per octave. A negative sign (-) is used to represent an attenuation, or reduction, of the input signal.

In the audio world, we commonly measure a range of sound frequencies between two points using an octave. An octave is a doubling or halving of a frequency number. (100Hz, 200Hz, 400Hz, etc.)

What crossover slope should I use for a subwoofer enclosure?

While you might think “the higher, the better” would be right, things get more complicated once you get past 2nd or 3rd order designs.

Generally speaking, a -12dB crossover slope is often the best choice and works well for most speaker systems. A subwoofer usually sounds very good with a 12dB or 18dB slope.

One reason is that it has a relatively affordable and uncomplicated design but still gives a good cutoff ability. This works great both for single speakers and 2-way speakers.

The most commonly used slopes are:

You’ll find that -12dB per octave crossover slopes are the most common for consumer electronics you buy.

Do I need a subsonic filter? 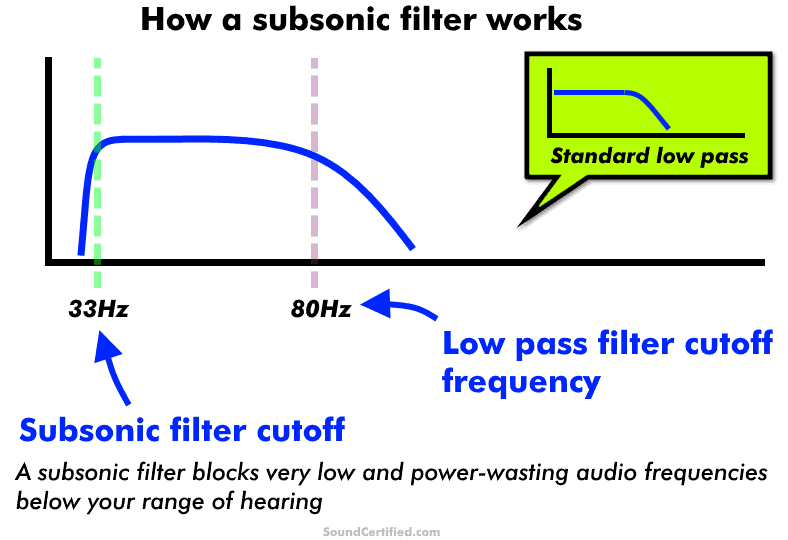 What does a subsonic filter do?

A subsonic filter is a high pass filter with a very low crossover frequency – often around 30 or 20Hz for example. The idea is to prevent bass waves that we can’t hear from being sent to a subwoofer box to prevent wasting power for no reason.

The frequency range for human hearing varies from person to person, but most people can hear somewhere down to around 30Hz or a bit below. 20Hz sound waves can be felt but not heard, so it’s pretty pointless to draw a lot of amplifier power for something you can’t even hear.

Not only this but most audio is mixed with the most enjoyable bass being around 40 to 50Hz or so for “thump” in music and rumbling or action sound in movies meaning 20 to 30Hz isn’t needed.

Do I need to use one?

Generally speaking no you don’t and in fact, in most cases, you won’t hear a difference. However, it certainly won’t hurt anything, and for some audio such as vintage record players where low-frequency rumble is present, it can be useful.

What is a bass boost control? Do I need to use it? 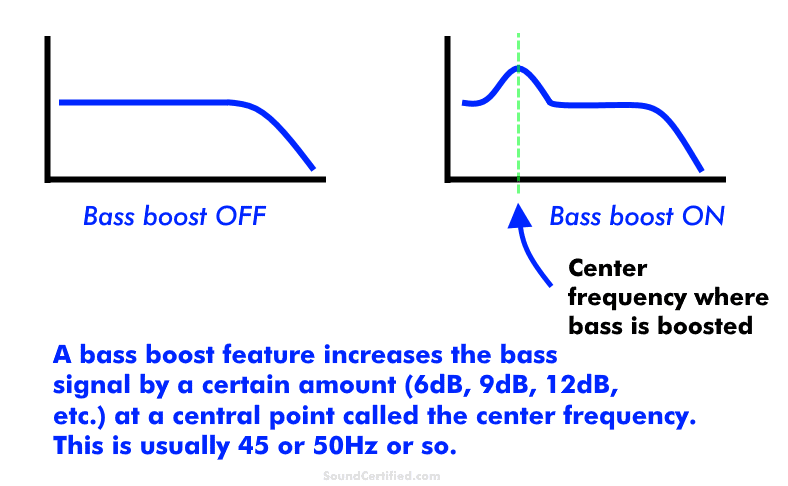 A bass boost control is an optional feature in some home stereos, car stereos, and amplifiers to increase the signal output at a certain point in the subwoofer output signal. It’s very common on today’s car amplifier products but is also sometimes a feature in home receivers.

It’s usually one of a few types:

It doesn’t boost all bass frequencies. Instead, it’s centered at a point called the center frequency. This is usually a fixed point at about 45 or 50Hz, right where the most “boomy” or “thumping” bass can be heard in music. 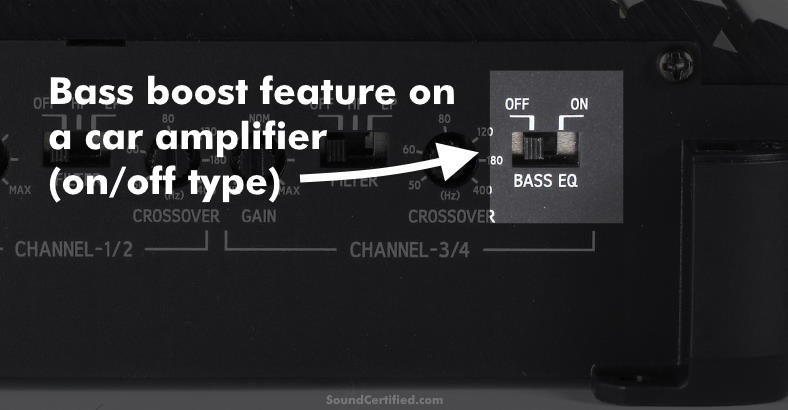 It’s more of a fun thing to have especially if you’d like some extra punch in your favorite music or if you feel your system is lacking in bass performance. Generally speaking, it’s not necessary with a well-performing subwoofer, but it can be nice to have. It’s worth giving it a try to see what you think.

Car amplifiers sometimes include a plug-in remote bass knob that lets you adjust it from the driver’s seat – very handy for when the music you love starts playing!

Why do some amplifiers have bass boost control and some do not?

Including a boost feature is entirely up to the manufacturer and marketing – some customer types would never use it (example: audiophiles for home stereo sound) while others like car audio customers may love having the option.

◀ PREVIOUS: What is the crossover frequency Fc?
NEXT: What should I set my high pass filter to? ▶
Leave a Comment Cancel reply