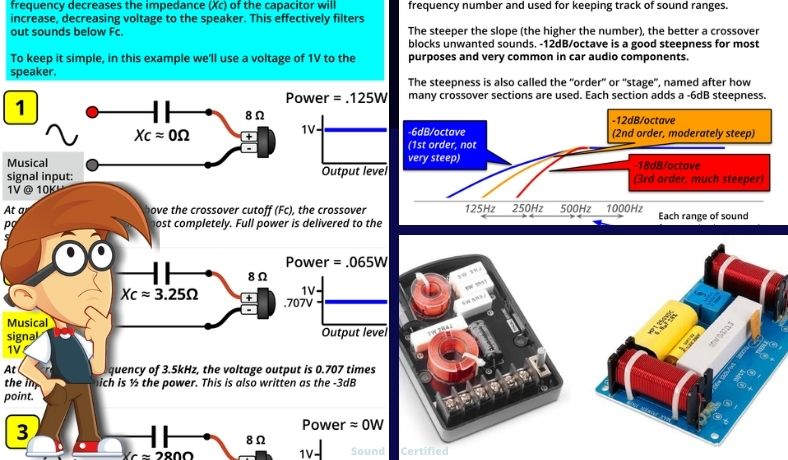 Crossovers are extremely important to speaker systems and a big reason we’re able to get sound quality we love.

In this article I’ll explain:

This diagram shows examples of the 3 main filter types used in crossovers. Also shown are the most common crossover slopes which is the “steepness” of the filter (how effectively they block frequencies beyond the crossover frequency).

A crossover frequency, commonly written as Fc, is the audio frequency point in Hertz (Hz) at which the crossover delivers -3dB (1/2) power output to the speaker. Fc is the marking point after which sound frequencies will be greatly reduced to prevent them from reaching a speaker.

Past the crossover frequency (Fc) point the power output by the crossover will drop more and more, with less and less power sent to the speaker. As it so happens, at Fc the voltage output to the load (speaker) is 0.707 x the input voltage meaning you can calculate the decibel drop based on the voltage out versus the voltage in.

Why crossover frequencies are important

For example, tweeters can’t play bass notes from music and can even be damaged by them. Knowing that, we’d want to choose a crossover frequency high enough to block bass notes sent to tweeters to prevent distortion or damage. (Typically tweeters have crossover frequency in the thousands of Hertz [written as KiloHertz or kHz for short] like 3.5kHz, 5kHz, and so on – well above the range of bass & midrange sounds in music).

A crossover frequency is also sometimes called the corner frequency or cutoff frequency since we think in terms of how sounds are “cut off” after that point.

The crossover frequency Fc is very important for crossover design 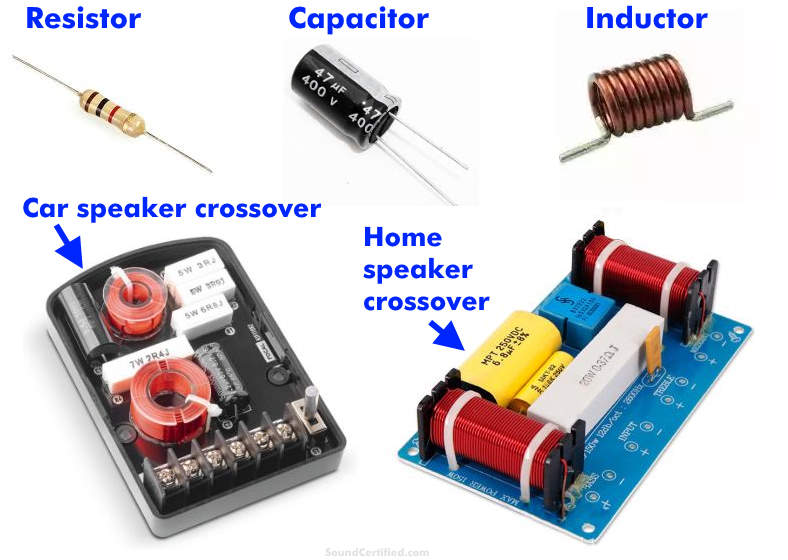 Speaker crossovers (also called “passive” as they don’t use electrical power to operate) use capacitors and inductors that are selected based on part values available and their cost. A crossover is designed based on a starting Fc frequency and adjusted as needed for the design goals.

Using the crossover frequency Fc as a starting point allows speaker system designers to calculate the part values needed (capacitors and inductors) depending on the speaker impedance. Since you can’t buy parts in just any value, the Fc we get based on what we want is a good starting point we can work with and adjust as needed to work with parts based on availability, price, and other factors. 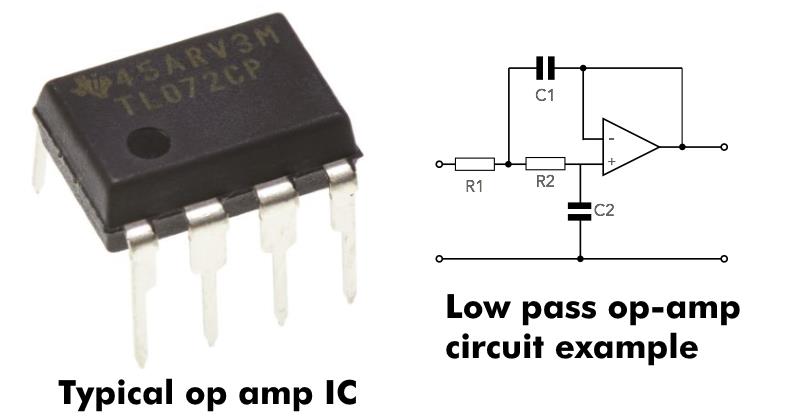 NOTE: In this article while I describe how passive (non-electronic, non-powered) crossovers and Fc work, the principles are exactly the same for electronic filters.

Just like their larger passive capacitor or inductor-based counterparts, operational amplifier based crossovers have the same slopes and crossover frequency behavior. They simply do it with the signal before it’s amplified instead of after it.

How to calculate decibels (dB) for the crossover frequency Fc

All sound frequencies after the crossover frequency are cut more and more past it with an increasingly steep reduction – to the point where they’re almost completely blocked.

In other words, a crossover filters out a range of sounds you’d like to prevent reaching speakers, starting at the crossover frequency.

In the electrical engineering world, we traditionally use decibels (dB) when we talk about power measurements since they’re often non-linear. This just means that mathematically, power is often measured, charted, and tracked using exponential math such as logarithms (“10 to the power of x”, for example).

How crossover frequencies (Fc) and dB are related 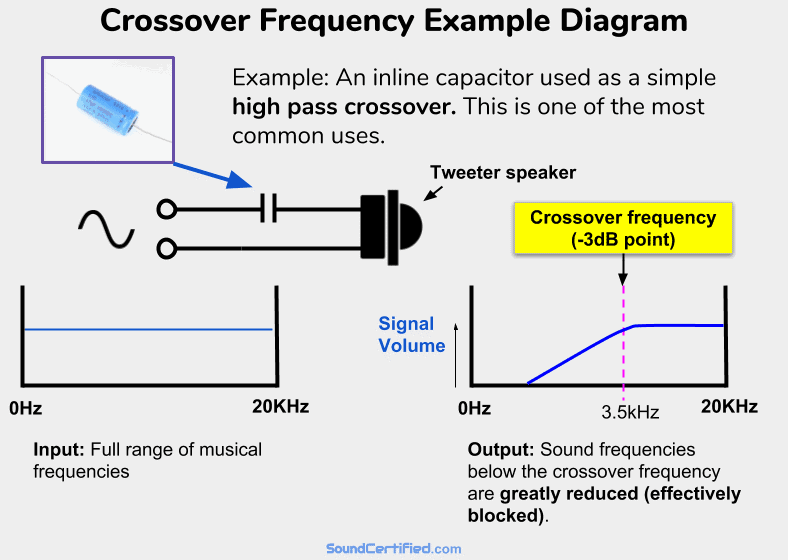 Because crossovers reduce power at their output, it’s pretty common to measure the output reduction in decibels. One reason for this is that they have a gentle “slope” (downward curve) rather than a straight line if you were to see them graphed across the full range of audio frequencies.

For that and other reasons, we can measure the power output reduction in dB. To do so, you’ll need to know either (1) the power before and after the speaker/from the amp, or (2) the voltage at the speaker and from the amp.

Knowing those, you can easily calculate the dB output of a crossover with a scientific calculator on your computer or smartphone.

You can calculate dB for a crossover using these formulas:

Understanding crossover signal level in vs out and “negative gain” 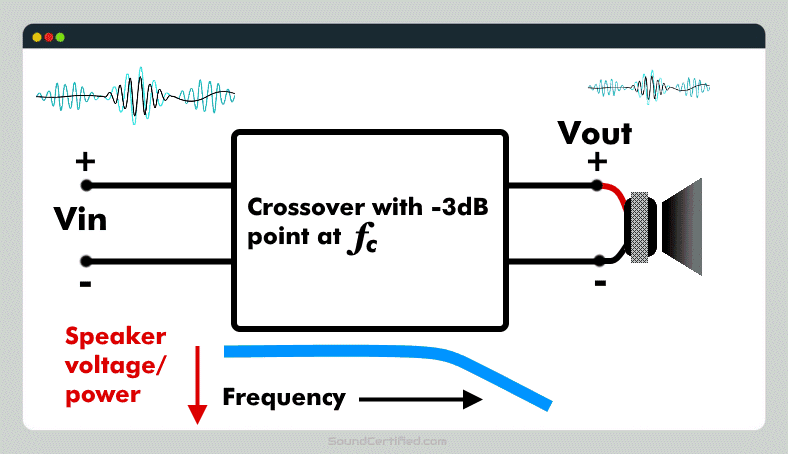 Crossover voltage out (called here “Vout”, the voltage to a speaker delivered from a crossover) can never be higher than the input – that’s not possible. Crossovers can only reduce the input directed to a speaker – they can’t amplify it. Some electronic crossovers do, but those intentionally have a gain on purpose and that’s not common in most cases.

For that reason, you’ll always get a negative dB answer if you do the math for the output of a crossover.

For the record, a negative dB value is used to show a reduction in engineering math while positive usually means a gain or increase in a signal. Amplifiers have a positive dB output (gain) while crossovers and some other components like resistors have a negative gain (a negative dB effect on a signal).

Attenuation is another way of describing a negative gain.

Note: the gain control of an amplifier is there to compensate for a high or low input signal level and is a separate section from the crossover circuitry. 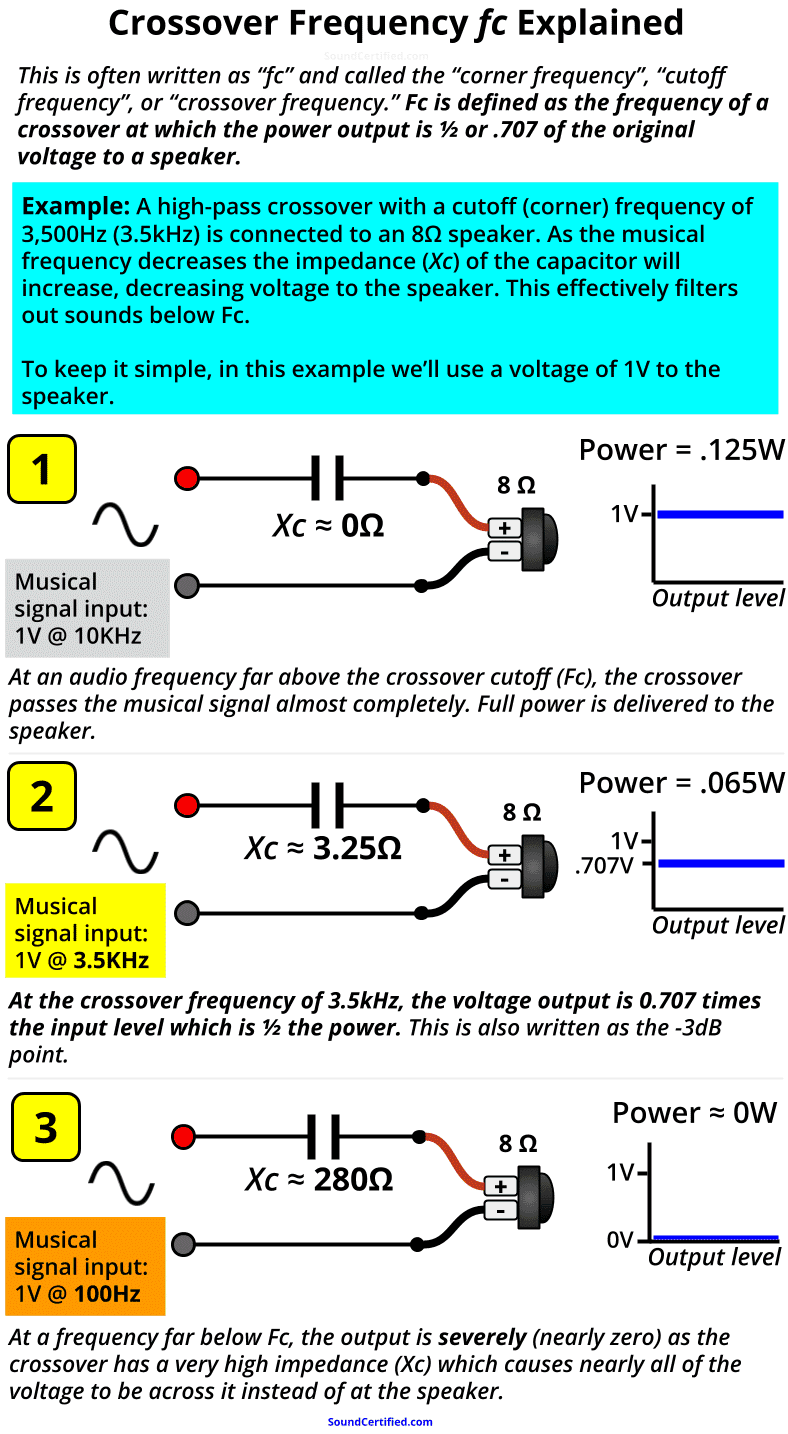 An example of a very common and simple high-pass crossover. A capacitor in series with a speaker will allow higher frequencies (above Fc) to pass with almost no volume or power drop to the speaker. It acts as a zero Ohm resistor (a short circuit wire) in series with it. However, for audio frequencies below Fc, the “resistance” (impedance, called capacitive reactance) of the capacitor will increase, allowing less and less voltage & power to reach the speaker. It will act like a very high-value resistor in series and therefore will block most of the signal from an amp sent to the speaker. In other words, a high-pass filter!

One of the problems I’ve found when we’re talking about this topic is picturing it in your mind. For example, it can be hard to understand what actually happens in real life when actually playing music in the real world vs just some explanation you’ve found on the internet.

All crossovers work the same – understand one, you understand them all (well, mostly!)

One important note I need to make is that the principles are the same regardless of the number of “orders”, or stages, a crossover has. For example, a simple 1st order crossover with a capacitor connected inline with a tweeter works on exactly the same principle as a fancier 2nd order 2-way crossover.

It’s just that the details are a little bit more complicated – not how it works. That part never changes.

There are some crossovers with more sophisticated features & designs I won’t get into here, but for the most part, the majority are all the same and do the same thing to varying degrees. The great thing is that once you understand the basics very well, you’ve got it figured out for the most part!

The fundamentals of how crossovers work with Fc

The most important thing to know is that crossovers work by “absorbing”, or preventing, voltage and power from going to the speakers they’re connected to for the sound frequencies we don’t want them to play.

In the example from my diagram further above, you can see that:

As you can see elsewhere in my article, the “steepness” of the drop in the power & signal level to the speaker depends on the crossover slope. A crossover’s slope is basically just a result of how many “stages”, or crossover sections, are used as needed for the particular speaker system or speakers we’re working with.

Crossovers like you see here and are always in increments of 6 decibels (dB) Per Octave:

..and so on, with -12db being one of the most common crossover slopes you’ll find for both car audio crossovers and home audio speakers too.

An octave is just a half or double of an audio frequency. For example, 200Hz is an octave of 100Hz, 400Hz is one octave of 200Hz, then 800Hz, and so on. Equalizers and other audio electronics may use other variations with finer numbers like 1/3 octave, for example. 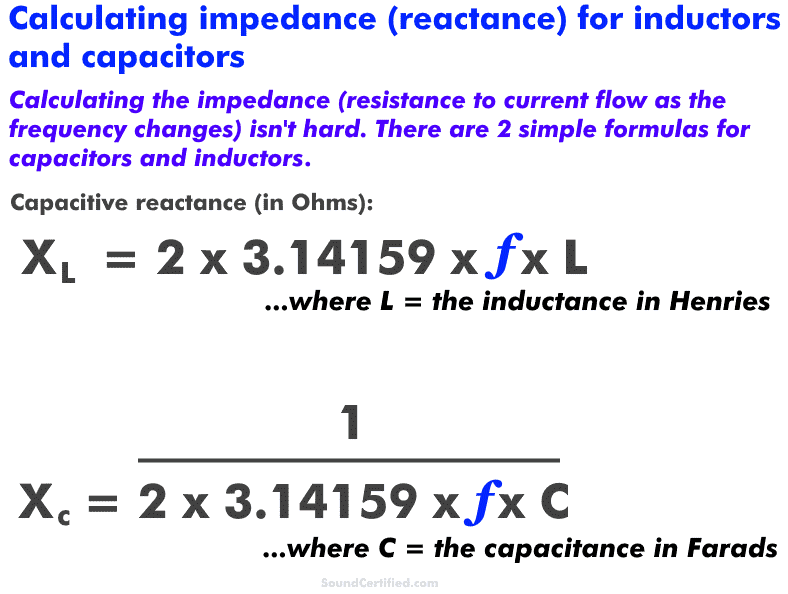 Shown here are the basic formulas for simple 1st order crossovers using capacitors and inductors. Capacitors have an impedance (Ohms) value that depends on the frequency just like inductors do.

Capacitors and inductors have a “resistance” called reactance (in Ohms just like resistance) that depends on the frequency. Here are a few basic things to understand:

Again, it both cases, it’s just a form of impedance much like how a speaker voice coil that has a certain amount of inductance due to the coil of wire inside does. Both are measured in Ohms (Ω).

However, they complement each other and behave pretty much like the opposite of each other. For example: 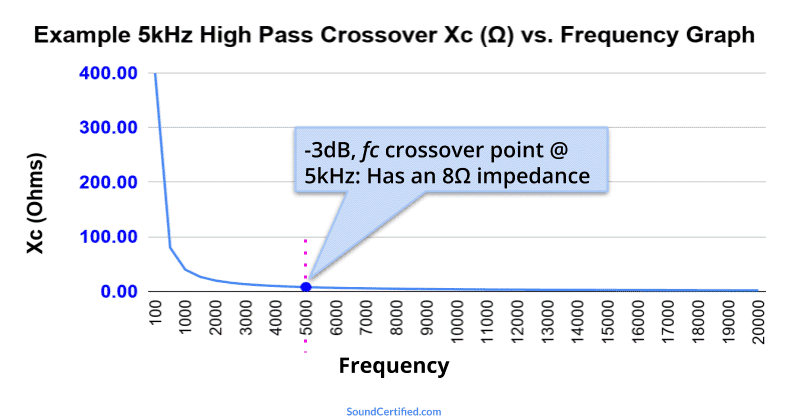 This graph shows an example of a simple high pass capacitor using a 3.98 microFarad capacitor with an 8Ω speaker with a crossover frequency (Fc) of 5kHz. At the Fc value, the impedance is the same as the speaker load (8Ω) which means the speaker power has dropped to 1/2. Further below Fc the impedance grows higher and higher, blocking bass frequencies more and more.

◀ PREVIOUS: What is a good crossover frequency?
NEXT: What should I set my low pass filter to? ▶
Leave a Comment Cancel reply