Skip to content
Home » Information » Stereo Vs Mono Sound – What Is The Difference? 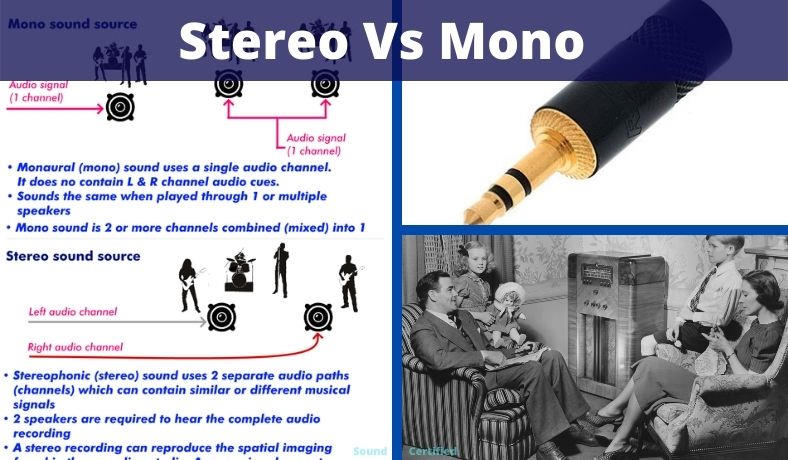 In this article, I’ll compare and explain the differences between stereo vs mono sound, why it matters, and much more.

I’ll also show you how stereo and mono sound connectors are different. Read on to learn more! 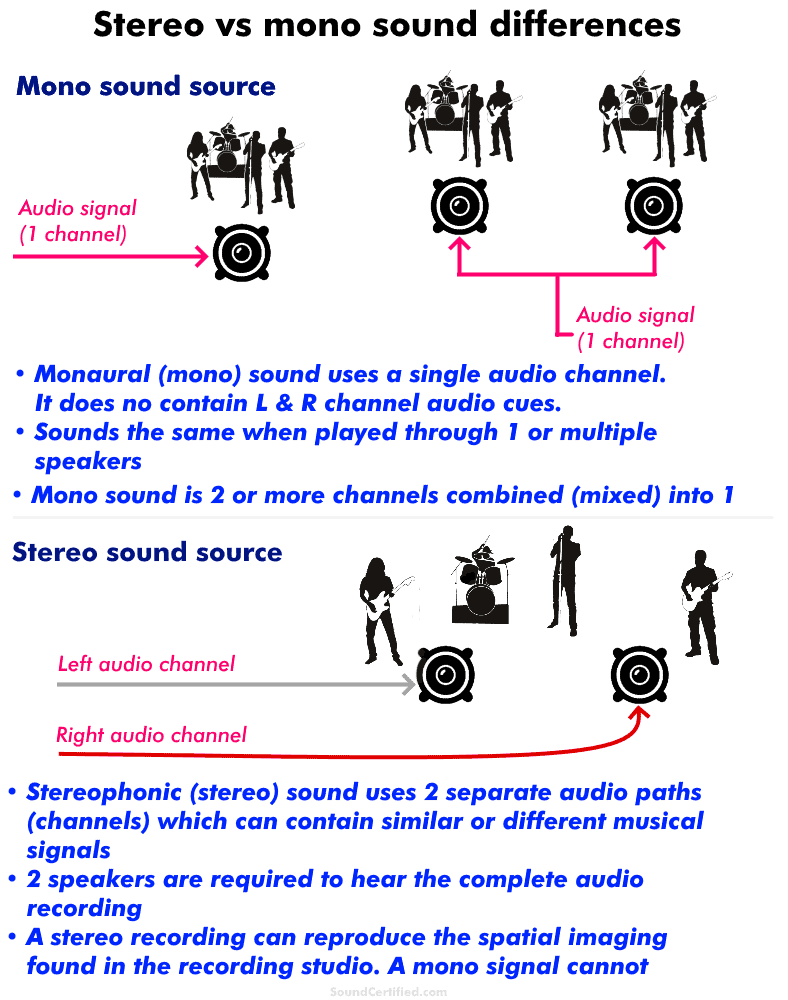 While a mono microphone is fine for mono audio or studio recordings, a stereo microphone is rqeuired at the minimum for true stereo. However a mono track can also be created using two or more studio audio signals mixed into one.

Why was mono popular for decades and still today? 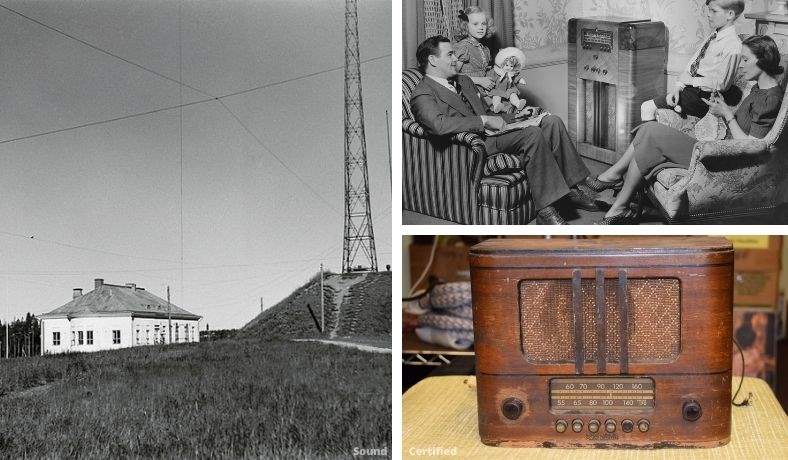 In the olden days technology was very limited, meaning once it was possible to record and reproduce sound the storage capacity was limited. Mono sound also was used for decades due to the origin of broadcast radio and portable radios that later came to be once the transistor became widely available.

In the days of fireside chat presidential address, news, singers or musical groups, or spoken word entertainment, stereo wasn’t necessary. While the original home radio receivers used simple tuners and vacuum tube circuits they were a remarkable step forward in entertainment for many people before the time of the television.

Home portable and pocket radios weren’t as inexpensive as today, meaning the mono design kept costs down. Likewise, monaural sound designs are simpler and help keep the amount of wiring and complexity down.

Stereo vs mono system AM and FM radio

Amplitude modulated (AM) mono radio was the original radio station broadcast technology. As radio broadcasts and consumer tastes changed over the years, it was typically used for talk radio and news content which doesn’t need stereophonic sound.

Likewise, the two channels are demodulated (extracted) on stereo-capable radios which then provide a left and a right output. 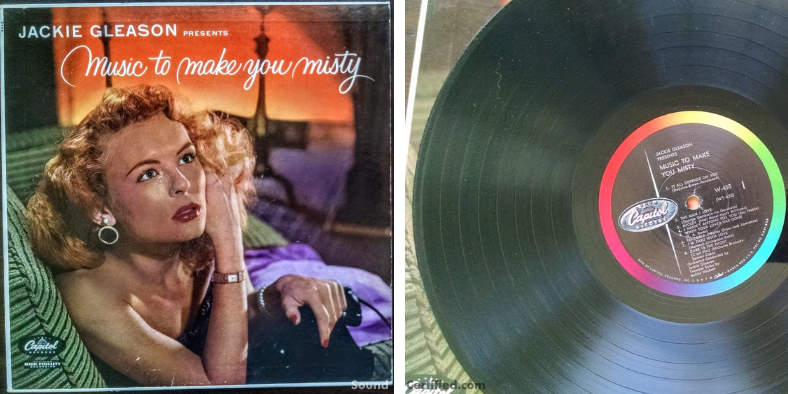 Musical recordings (such as vinyl records) were originally sold as a mono record version until stereo pressing machines and stereo record player designs came to market. In fact, many popular albums had a stereo version promoted as better sounding than the mono version. 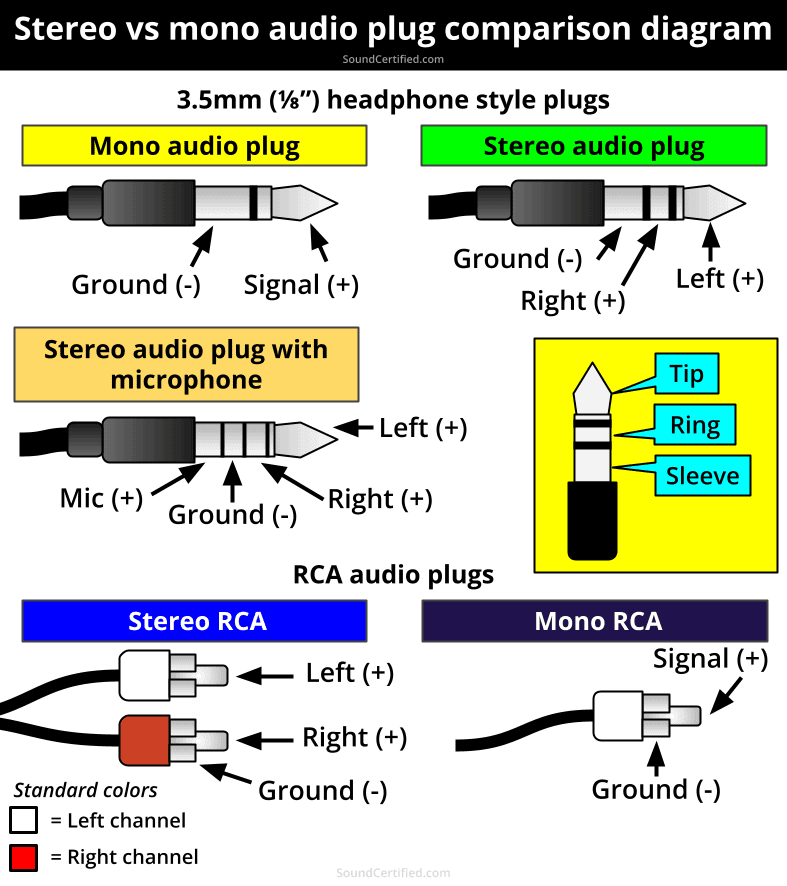 Mono sound is very simple in that it normally only requires two conductors:

Stereo sound is similar but adds a 2nd signal conductor wire. For analog (non-digital) cables, one is marked for the left channel and one for the right. These are very often represented by white for the left and red for the right, although this practice isn’t always followed.

Headphone plug connectors (3.5mm, 1/8″), 1/4″, and RCA style cables are some of the most popular. Tip-ring-sleeve (TRS) styles such as headphone plugs use a tip (T), one or more rings (R), and one sleeve (S) conductor that make contact with points in a matching jack.

TRS and RCA plugins are used in a wide variety of audio systems:

RCA connectors use a center pin that carries the musical signal for that channel and a second conductor (sometimes called the shield) as the negative (-) conductor.

Additionally, some 3.5mm jacks and connectors may add a 4th ring conductor for optional microphone use. This usually requires an adapter when using the musical conductors at the same time.

What does it mean when a song is mono or stereo?

A stereo song, when used on a good quality speaker system with 2 speakers, can recreate stereo imaging. Imaging is the representation of stereo field spatial cues your ears hear and that your brain interprets to be able to tell where sounds are coming from. This comes both from stereo reverb the microphones pick up as well as the different sound levels between the left and right.

For example, many stereo songs have the singer’s vocals placed in the center and not only the left or right. Other instruments will appear to come from the left, the right, or in between according to what you hear.

Stereo track recordings can also be “downmixed” (combined) into mono tracks. This avoids missing out on some portions of the music which happens when playing on one channel.

Which is better – stereo or mono?

The truth is that there’s not a single best answer – it depends on the application.

Can you get surround sound from mono or stereo?

You can get some types of surround sound from a stereo signals source but not from a mono signal.

While you cannot get a 5.1 surround sound effect like with DTS or Dolby Digital formats, Pro Logic can decode a 2.1 surround audio effect into 2 analog (non-digital) channels which can be carried by nearly any standard stereo recording.

You’ll need a surround sound decoder to do so.

Other formats and gimmicks have existed to produce a “surround” effect from standard non-Pro Logic recordings but they’re nearly always mediocre at best. Some video games use a 2-channel audio track to provide Pro Logic II output as an option.

Check out these other great articles

I hope you learned quite a bit about stereo vs mono sound. Like it? There’s more here: