We all enjoy music and speakers make that possible – but it’s confusing if you’re not sure how to connect them the right way.

In this post, you’ll find clear and detailed speaker wiring diagrams to help (and that you can print out if you like, too!).

I’ll go into detail about the right and wrong way to wire speakers and connect them properly to your stereo or amplifier. It’s actually pretty simple once you learn the basics. 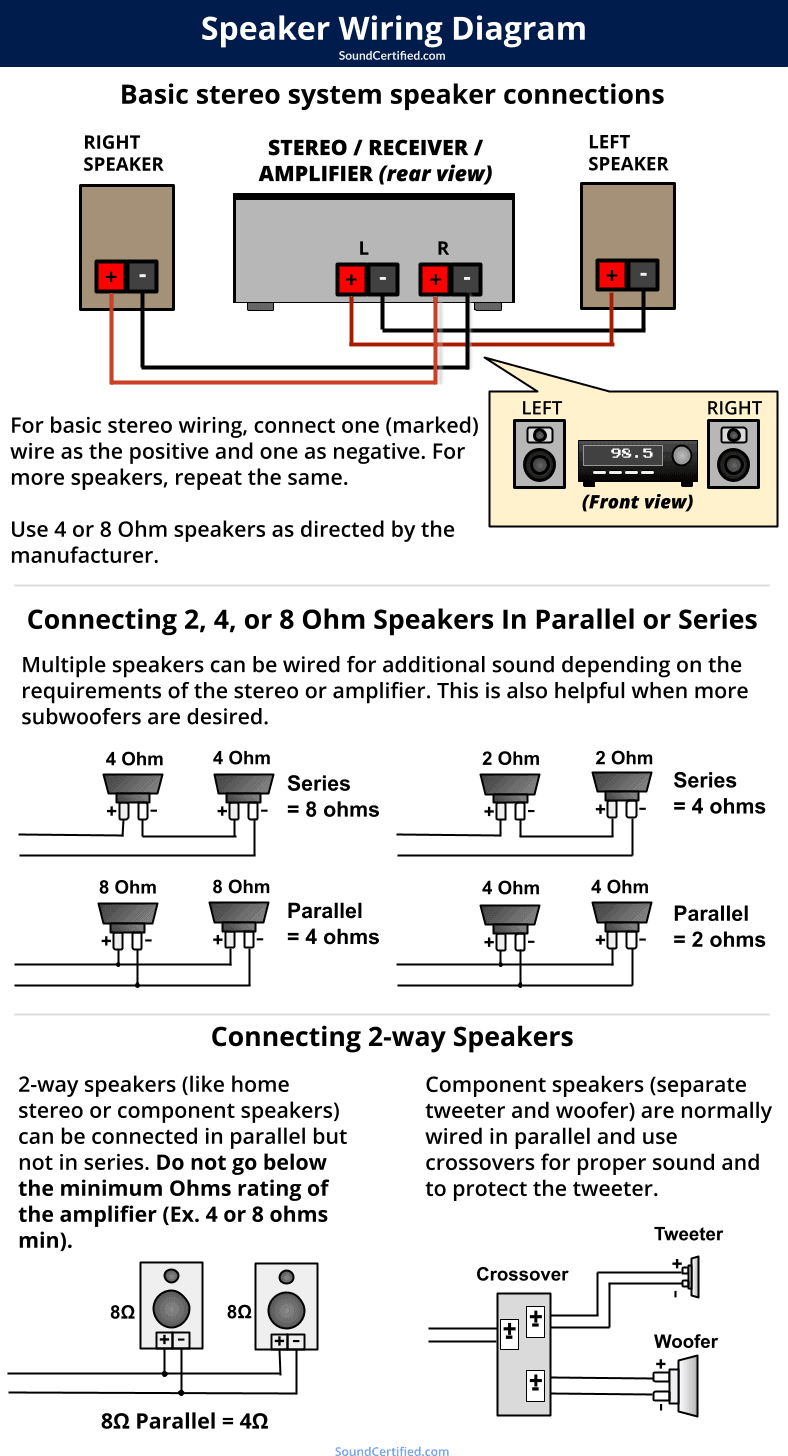 1.  What is speaker impedance? (the “Ohms” rating)

Speakers, much like other electromechanical devices, all have an electrical resistance to the flow of electrical current, much like a standard resistor, a light bulb, or many common items you’re familiar with.

The difference is how they behave when music is present when they’re connected to a musical amplifier of some sort.

The resistance value comes from a long coil of wire inside each speaker called a voice coil. A voice coil is a coil of wire that, when placed inside a magnetic field, makes the speaker move and produce sound when driven by an amplifier. 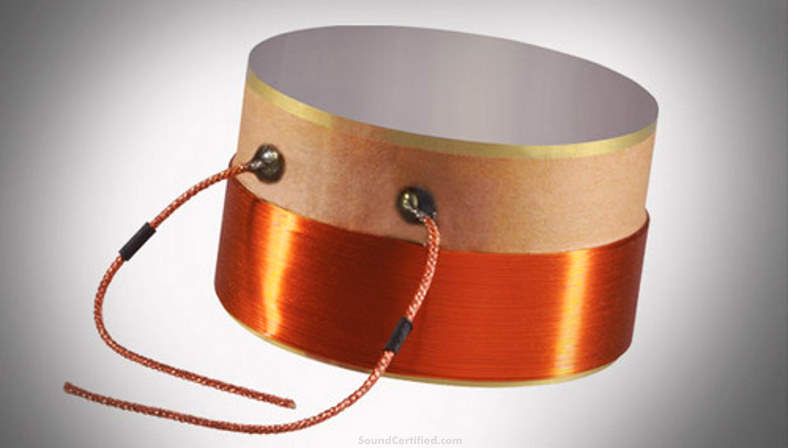 Speakers contain a long wound loop of wire called a voice coil. Loops of wire have a property called inductance which affects a speaker’s resistance value depending on the frequency (sound range) being played.

As they have electrical properties that include inductance and capacitance, their “total resistance” can actually change with the music slightly. Because of this, there’s some extra math needed to figure out the total resistance.

The word used to describe this is called impedance.

Speaker impedance is just a more advanced way of finding the total resistance, and by tradition is measured in units called “Ohms.”

The good news is that you don’t have to worry too much about the details – it doesn’t matter for basic speaker use, and long as you understand the basic rules you’ll be fine!

All amplifiers of any type – where it’s a car stereo amplifier, home stereo receiver, home theater amplifier, and so on, have a minimum Ohms (impedance) rating. It’s important that you pay attention and don’t exceed the minimum speaker impedance rating.

This is because as the impedance is lowered, the electrical current increases and the stereo has to do more work. This increases the amount of stress and heat it has to handle.

If your stereo is labeled by the manufacturer as being “8 ohm speaker compatible” or similar, that means connecting lower impedance speakers can cause excessive heat and possible damage very quickly.

For example, connecting a 4 ohm speaker to an amplifier that is labeled as working with 8 ohm speakers would mean it would have to produce double the electrical current to the speaker!

Image of the rear of a home stereo receiver/amplifier. The recommended speaker impedance ratings are usually listed above the speaker wire posts. A home stereo, for example, may often list 6-16 ohms as being ok for use.

I’ve seen many attempts by people who had friends who claimed they could “boost the power” or “get more power” by some claimed trick, but it doesn’t work. They ended up with a burned-out amplifier.

An amplifier can only handle so much heat and stress before it fails, so be sure to observe these rules. Be sure you wire speakers to meet the minimum Ohm rating you need.

Remember: don’t use a speaker impedance below the rating given by the manufacturer. Overheating or permanent damage can result. I’ve seen it happen!

3. What is speaker polarity?

Speakers are different than other devices in that they work using alternating current (AC) instead of direct current (DC). This is good news! It means you can’t harm your speakers in most cases by having the positive (“+”) and negative (“-“) wiring reversed.

Unfortunately, it gets just a little bit more complicated when we use more than 1 speaker.

Speak polarity and why you should match speaker connections

As I mentioned, speakers work by moving a cone back and forth in order to produce sound. If you wire 2 speakers in a stereo with different polarities (for example, one has positive and negative wired as labeled, and the 2nd speaker has the opposite) an interesting thing occurs: they’re out of phase and some sound cancels out.

The result is a strange and poor sounding stereo. In most cases, you’ll notice a lack of bass sound and it won’t sound pleasing to the ear as expected. 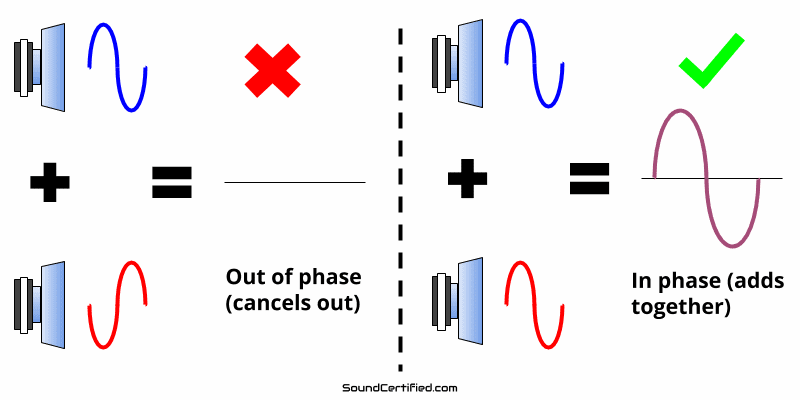 When speakers are wired the opposite of each other sound waves cancel out. When wired the same, sound waves add together for more sound.

Speakers that are wired differently sound poor because much of the sound is canceled out. Basically, it’s simply because sound waves from one speaker are moving in the opposite direction of the other speaker – and if they’re close to the same time and frequency range, often they cancel out.

This is why when 2 woofers are placed in a box and are wired in parallel but with opposite connections to each other, they are “out of phase” and have almost no bass! It’s because they are doing the opposite work rather than working together to produce more sound.

While one is moving up, the other is moving the opposite direction, and so on.

So the most important thing here to remember is to wire speakers consistently the same way as each other.

2-way speakers, such as home stereo or car audio component speakers, are those which come as a pre-designed speaker set and use a crossover. The job of a crossover (also called a passive crossover, because it use basic capacitors and inductors rather than electronics) is to restrict the music production each speaker tries to produce.

For example, tweeters can’t reproduce bass frequencies (and can in fact be damaged by them) so a 2-way speaker crossover is used to prevent this. Similarly, a woofer can’t produce high pitch sounds well and is prevented from doing so.

Unlike standard separate speakers, 2-way and 3-way speakers that have a crossover can only be used in parallel and not in series.

This is because unlike separate speakers with no crossovers, in this case, many sounds will be filtered out. What this means is that little to no sound would be produced if another 2-way speaker is connected in series. 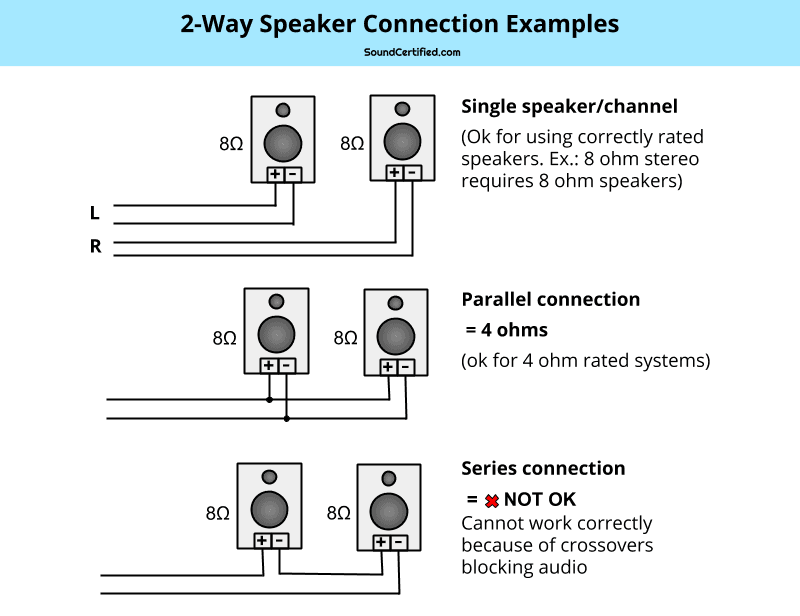 Therefore if you have a home stereo or car stereo in which 2-way speakers are used, you’ll have to add more 2-way speakers (if the total impedance can be supported by the amplifier) or add more amplifier channels for more sound.

5. Doubling the number of speakers or amount of power does not double the volume

In some cases, more speakers can be added to increase the amount of volume you can get or to place speakers in more rooms, more locations in your vehicle, and so on. You also may have wondered what would happen if you bought an amplifier with twice the power of your present one.

There’s one important thing to understand, however: having 2 or 3 speakers instead of one does not double or triple the sound. It increases a few decibels (dB) for each speaker added.

Doubling the power does not double the volume either.

This is because of how the human ear works and the physics of sound, along with how speakers work and how much volume they can produce for a given amount of power.

So as you can see, doubling the amount of power you can drive a speaker at does not mean you’ll double the volume. It increases it a very small amount (as far as your ears are concerned).

You can also see from above that really cranking the volume takes a lot of power!

How to get more volume from speakers

The best ways to get more volume  in most cases are:

Most people need an amplifier that can produce enough volume to fill a room or vehicle and turn up the volume from time to time. I like to use 50W or higher per channel as a good rule of thumb when buying an amplifier.

How to read speaker positive and negative labels (+ and -)

Home stereo and car speakers normally often use a red or plus sign “+” to indicate the polarity for the speaker wiring terminals which you connect your wiring to.

Here are a few things to know there as well:

Here I’ve provided you with a speaker diagram showing basic connections, I explained several important things you need to know about speakers and speaker wiring. Hopefully I’ve given you more understanding about how to connect speakers and get the most enjoyment out of your system.

Have questions, comments, or suggestions? Be sure to leave a comment below or send me a message.

Confused about tweeters? Here’s a helpful guide explaining what tweeters are and what they’re used for.

Interested in bridging your car amp?  Find out how to bridge a car amp in this post.