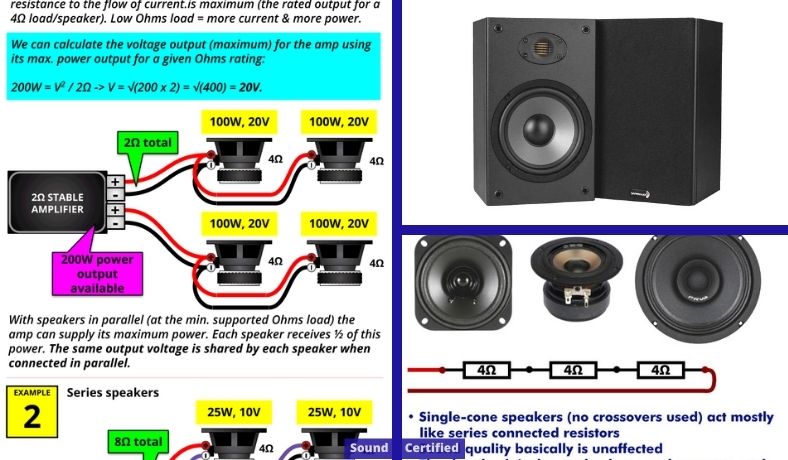 Ever wondered why there’s a difference between series vs parallel speaker wiring? How about how it affects power, sound, and the speaker (Ohms) load your radio or amp sees?

There’s a lot more to series vs parallel speaker wiring than you may realize. I’ll explain it all here in a way anyone can understand.

Read on to find out what you need to know.

Which is better series or parallel speaker wiring? 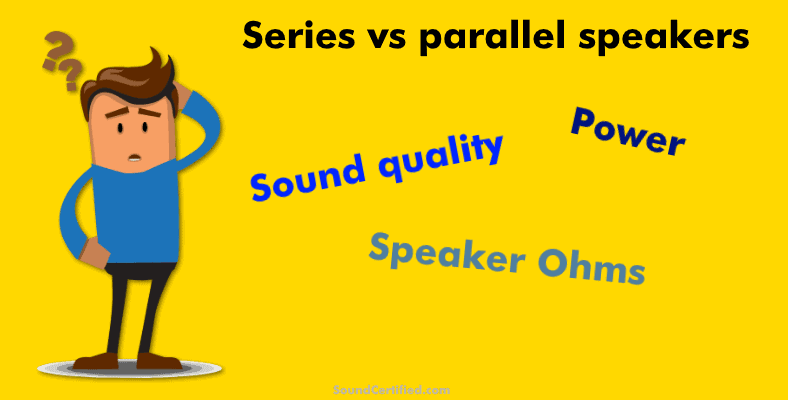 Here are the main points you need to know for series vs parallel speaker wiring:

The main thing to remember is that there’s a list of reasons why you don’t want to use most speakers in series – all of which I’ll explain in more detail as we go.

When it comes to sound quality you may not be aware of it but parallel speakers maintain their sound quality while series connected speakers can have a bad or “odd” sound.

That’s because many coaxial speakers as well as 2-way or 3-way speaker cabinets or car speaker systems use speaker crossovers in their design. Speaker crossovers are used to block unwanted sound frequencies from reaching speakers that aren’t well suited for them.

For example, tweeters can’t handle low bass or midrange as it causes terrible distortion and even damage. Woofers or midrange speakers, similarly, cannot produce treble (high frequencies) well and sound poor. When combined, crossovers create a better-sounding speaker system that gets the best performance from them.

Crossovers (electrical components called capacitors and inductors) block sound based on a particular speaker load resistance in Ohms. When that speaker load is changed, something called crossover shift occurs.

This means that the crossover frequency changes greatly, allowing unwanted sound to pass to a speaker or speakers. Knowing this you can understand why series-connected speakers can have poor sound: you’re connecting more speaker load (Ohms) than should be used.

It’s also adding extra capacitance and inductance in series and parallel that can cause some odd problems I won’t go into here. That’ll affect the sound as well.

Note that there is an exception to this and you can use some types of speakers in series without any noticeable sound quality problems. (I’ll explain more later)

Are speakers louder in series or parallel? What about power?

As a general rule, parallel speakers are louder than series speakers. That’s because:

Note that this is the normal situation when you’re using speakers rated for the amp or stereo you have. It’s a different case when purposely using lower impedance speakers in order to add keep the total speaker load low.

I’ll explain what I mean below.

Does series or parallel give more power?

As I mentioned above, wiring speakers in series means (in most cases) that you will be increasing the total speaker load above that recommended for the amplifier, receiver, car amp, etc. There’s nothing harmful about having the total Ohms load be higher but it comes with a price when it comes to power.

For example, let’s say you have an amplifier with the following power specs:

It is possible to purposely wire speakers in series to get the same power output from a stereo or amp. Taking our same example from above, we could do this:

Note: Speaker volume doesn’t add together like Ohms or other things. Doubling the power to a speaker (or using two speakers in series with 1/2 the power each of a single speaker) doesn’t double it – it increases it by 3dB due to how our hearing works.

That means two 50W speakers in series will have the same volume as a single speaker of the same impedance w/ 100W power. 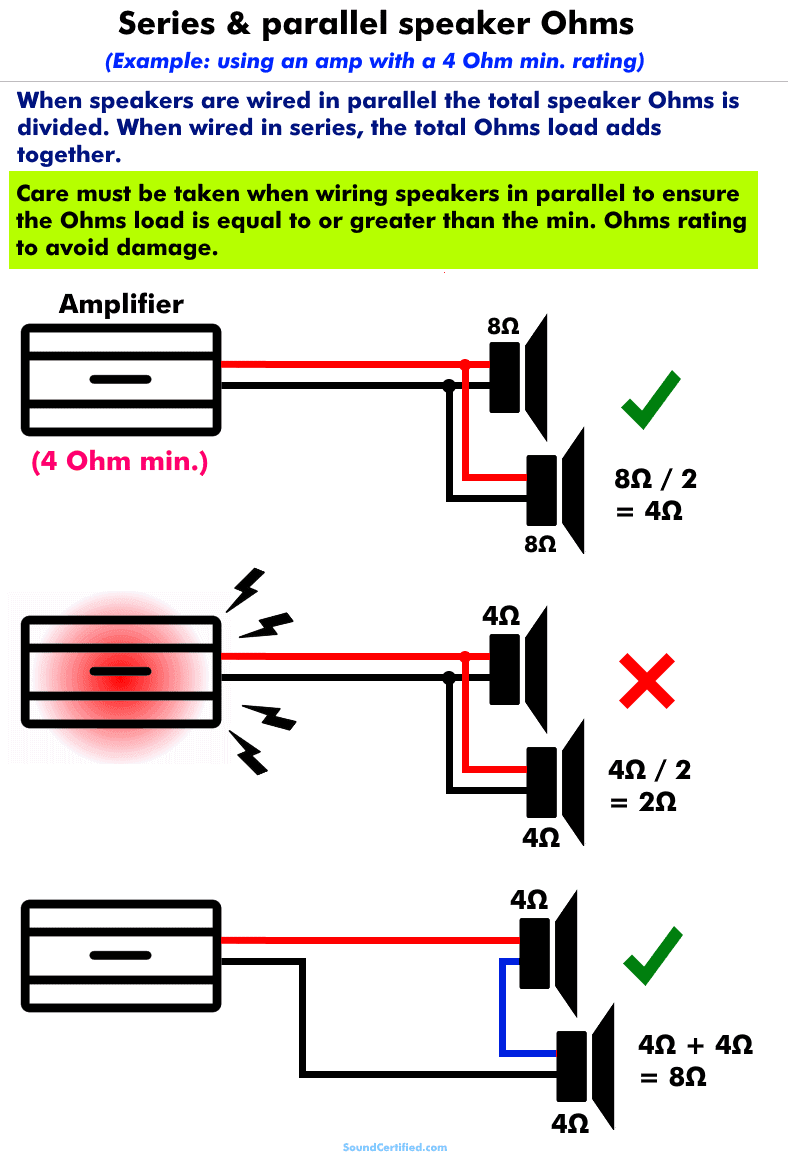 The important thing to understand about wiring speakers in series or parallel is the total speaker load (Ohms) must be equal to or higher than the minimum Ohms rating of the amp or stereo.

That’s because using multiple speakers in a way that drops the total Ohms (impedance, or resistance to the flow of electrical current in other words) will cause excessive current that can permanently damage an amp, receiver, or stereo. The electronics used in audio equipment has a limit that it can’t exceed.

What type of speakers sound ok with series wiring?

There are some speakers you wire in series without sound quality problems. These are:

These types don’t have crossover components that will affect the sound.

Although it’s true that speaker voice coils have some inductance due to their wound wire, it’s not much, and wiring these types of speakers in series works pretty well. However, be aware that any time you wire speakers in series both the total power delivered and power to each speaker will be lower because you’re changing the speaker load.

When wiring speakers in series the power and volume loss is a compromise you have to live with.

That being said, it’s still useful for different sound projects like a simple ceiling speaker setup, making a speaker array design, and some other unique designs. Also for amplifiers, receivers, or home stereos with lots of power available it’s less noticeable since they can make up the difference a bit.

You can also use regular single speakers such as tweeters or mids with a custom crossover designed for them. There are a few situations where this is handy or even necessary but it’s critical to do the math and use the correct crossover components since the total speaker Ohms load will be higher.

Wiring speakers in parallel vs series – pros and cons

There are a few pros and cons I’ll summarize for you here, as while parallel speakers are generally the best choice sometimes series has advantages.

One thing to bear in mind is that when a connection is lost with series speakers, all speakers lose sound since they’re no path for the electrical current to flow unlike parallel speakers.

Additionally, if series speakers are spaced apart it can be a bit of a hassle to connect them to each other.

There’s plenty more to read and learn! Check out some of my other helpful articles: