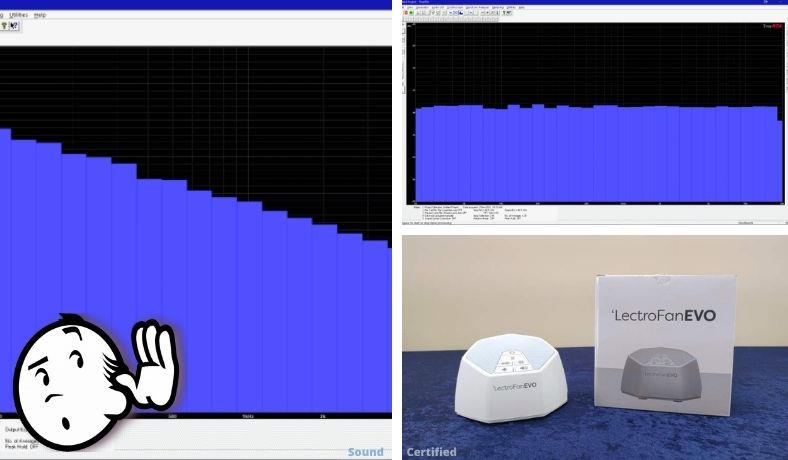 Curious to learn what the differences are for pink noise vs white noise vs brown noise? You’re in the right place!

I’ll explain it all here in a way anyone can understand – plus you can hear my noise examples for yourself.

Pink, white, and brown noise are what you call colored noise (sound patterns). The noise color name is used to describe the characteristic power spectrum of a noise signal.

In other words, colored noise signals have different output patterns (patterns of their volume level) for different frequencies as you’ll see below.

While there are others as well (violet noise, blue noise, grey noise, etc.) pink, white, and brown are some of the most common. The three covered in this article are some of the best for blocking ambient noise and make great sleep noise patterns.

What is pink noise? 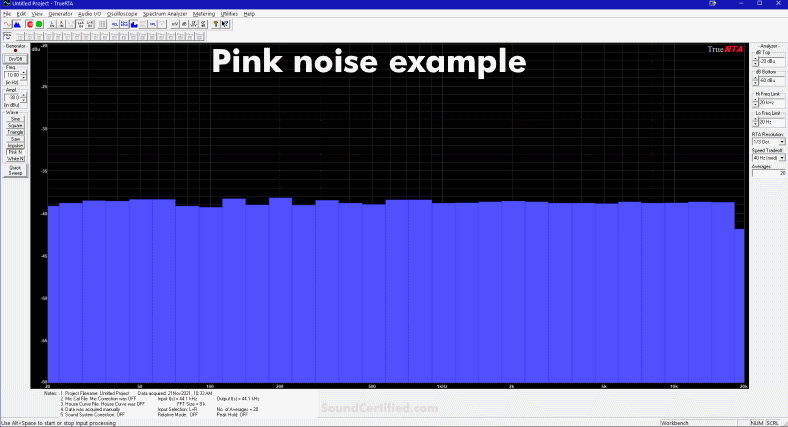 An example image of pink noise on a real-time analyzer (RTA). Here the volume is shown as even, representing how our ears perceive it.

Pink noise is a random sound pattern in which the spectral power density (the power per frequency) decreases as the frequency increases. In other words, the volume output is inversely proportional to the frequency of the signal.

It’s sometimes described as 1/f noise (1/frequency) and when plotted on a logarithmic scale will appear as a downward slope. However, pink noise sounds like it has even volume to the human ear as we are more sensitive to upper sound frequency ranges.

What is white noise? 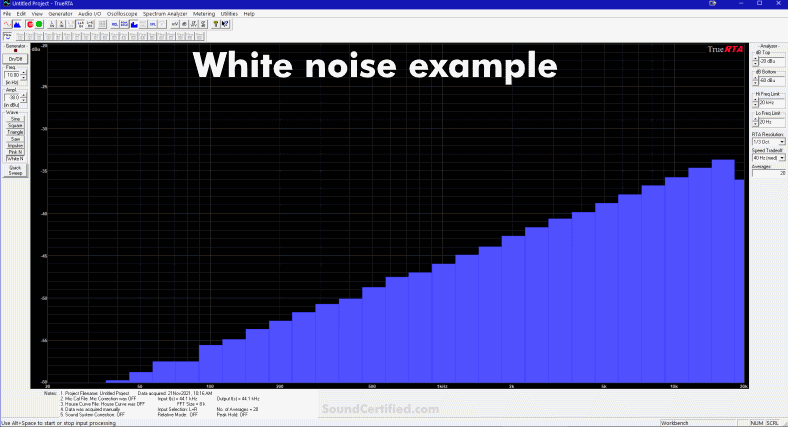 An example image of white noise on a real-time analyzer. Here the RTA shows how white noise is perceived by our ears – it sounds “louder” at higher ranges.

White noise is characterized by a random sound pattern that has a flat spectral density (the same volume amplitude or intensity) across all sound frequencies. In other words it has equal intensity across the increasing frequency range.

To human hearing, it can sound like higher frequencies are louder since our ears are more sensitive to those.

What is brown noise? 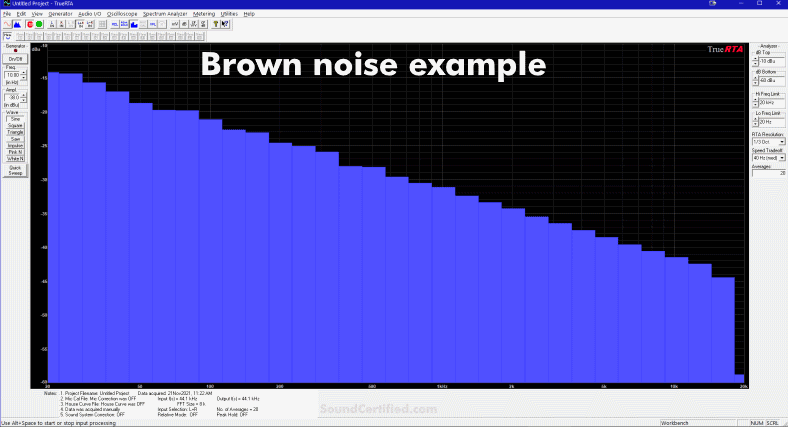 An example image of brown noise on a real-time analyzer. Here the RTA shows how brown noise is perceived by our ears – the lower frequencies have much higher volume output so you’ll hear more bass.

Brown noise is similar in some ways to the sound of ocean waves.

What are pink noise, white noise, and brown noise used for?

Pink noise like that created by a sound generator or an audio test track is commonly used for audio engineering. This can be for a number of purposes:

A very common example of system tuning is using a high-performance microphone and a hardware or software-based RTA to measure how a speaker system performs. You can then adjust tone or EQ controls to smooth out areas that need attention.

Pink noise isn’t typically used for sound masking although it can be. One reason is that it sounds more “harsh” to many people.

White noise is one of the most popular and is commonly used for blocking unwanted sounds. This helps with studying, relaxing, sleeping, or privacy in therapist offices.

White noise can also have a calming effect on people with anxiety issues.

Note: “White” noise is also commonly used as a name for sound patterns that are somewhat similar but not exactly the same. For example, a box fan or sound machine’s output may be called “white” even though it’s not technically correct.

Brown noise is less popular than white but is also a good choice for sound masking purposes. It has an even deeper low end which can be more helpful for blocking the human voice or bass in music, both of which carry through walls and can be harder to mask out.

As it’s very similar to an ocean shore it can be relaxing as well.

Rather than just write about them, I’ve gotten together a sample of each sound you can try for yourself. Each video shows how the sound pattern appears on a test analyzer program, more closely representing how they appear to your ears.

(Note that when shown on a logarithmic engineering graph chart they’ll have a different shape due to being graphed by the octave bands – it can be a bit confusing.)

White noise vs pink noise vs brown noise sleep options – which is best?

When it comes to what color noise is best to help your sleep quality, really it comes down to what works best for you. Generally speaking, however, pink noise usually isn’t one of the best choices.

Real white noise can sound unpleasant and harsh because of the higher frequency sound it creates. However, in reality it isn’t really an issue for products or apps available to help you rest. They’re generally not true white noise and don’t sound hard on the ears.

My personal advice is to try a variety of sounds, sound tones, and/or sound apps and find what works best for you. Additionally, using good headphones or good speakers can make a huge difference!

How does a white noise machine work? 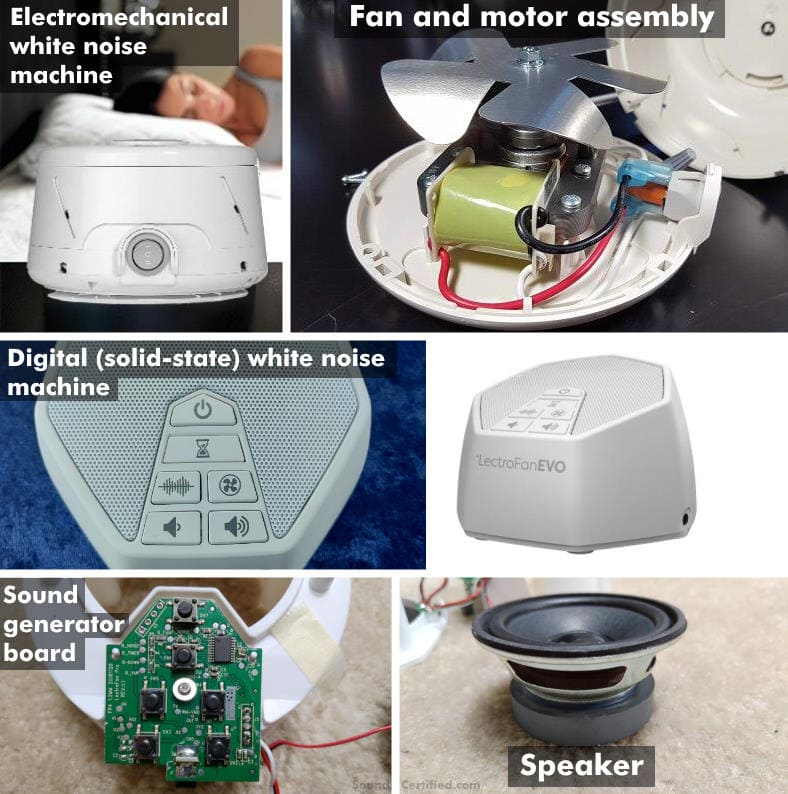 White noise machines work by generating background noise that blocks outside sounds as well as creating a more peaceful mood nearby.

They normally fit into one of 2 categories for their design and how they produce sound. Both

These are still sold and are still popular today. They use an electric motor and compact fan assembly. As the fan blades spin, the moving airflow creates white noise.

Electromechanical units are less common today thanks to modern technolog but are still a favorite of many people. Some models come with the ability to adjust volume and tone.

An electronic sound machine generates noise patterns stored in digital memory thanks to microchips. The circuit board drives a speaker to produce sound. Most a digital volume control along with different sound options.

Check out some of my other great articles: