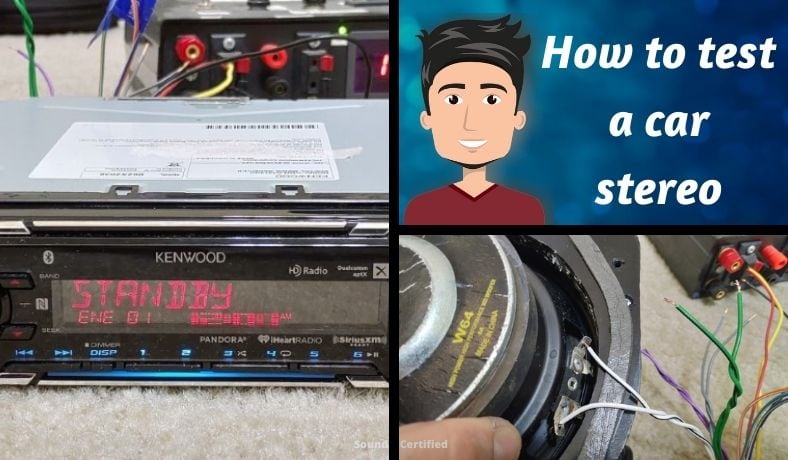 As an installer, I saw a lot of used car stereos that customers brought in for installation but ended up being bad. In fact, it happened so often we never would install a car stereo without bench testing it first.

It’s so important to know how to test a car stereo before investing your time & money installing it. That’s why I put together this article – to help you do it yourself!

This article is part of the automotive head units main page.

Basics first: what you need to know before testing a car stereo

The truth is that you don’t really need to “stress test” car stereos. Especially with second-hand and used radios, the real goal is just to be 100% sure your car stereo works before you go through the trouble, time, and effort of installing it.

Fortunately, it’s actually fairly easy to do. You’re going to need to do just a few things:

The great news is that you don’t need to install a car stereo just to check it properly. In fact, you can use just a few simple things and be done in a little while. You’ll need the following:

In this article, I’ll cover the steps for testing a car radio, how and which power supplies to use, and the important details to help you before you start. If it’s your first time, I’d plan for spending about 10 to 30 minutes of your free time going through the steps.

Once you’ve done it, however, it’s a lot faster the next time. 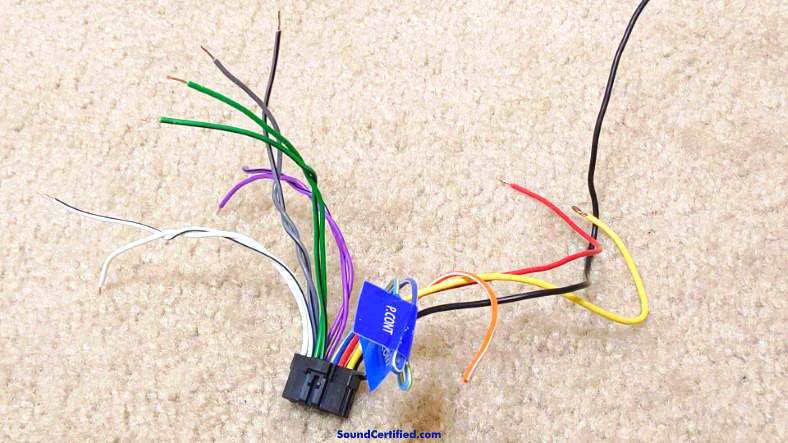 Most – but not all – car radios have a wiring harness that’s color-coded to make installation easier. Power and speaker wiring is usually color-coded while some additional specialty wiring depends on the brand. Note that not all manufacturers follow the wiring color standards so it’s best to check to be sure. 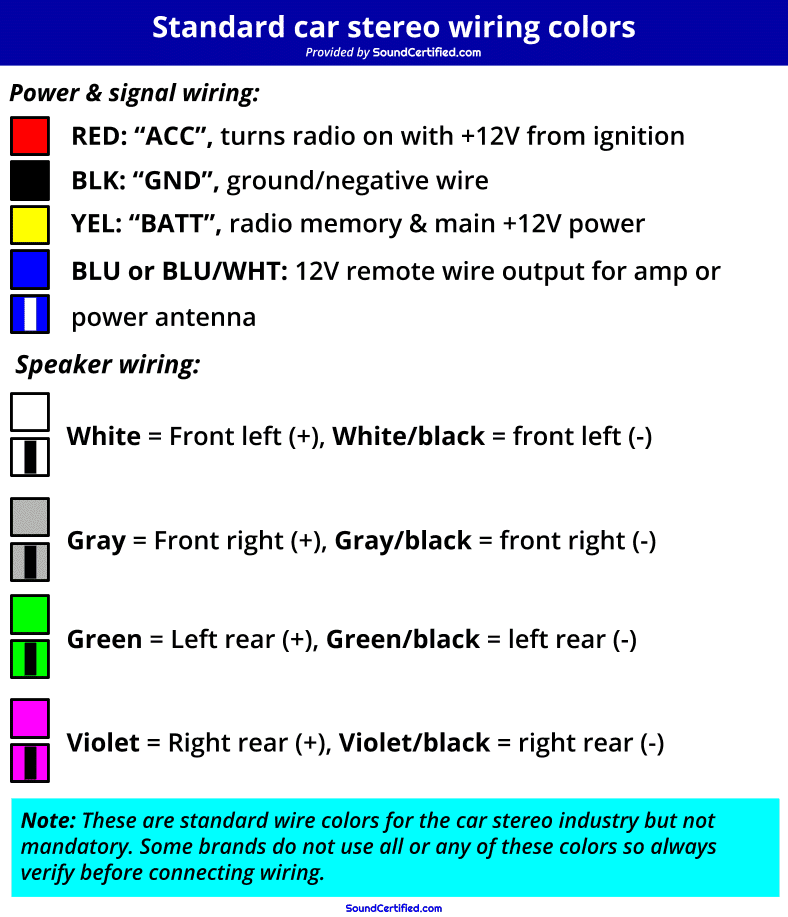 Above is a handy chart to help you connect the speaker and power wiring you’ll need when testing a car stereo. Car stereo harnesses you find on most – but not all – brands use standard wiring colors that tell you exactly what they’re for including power, ground, and the speaker connections including positive & negative markings.

This is especially helpful if the radio’s wiring label is torn off or damaged like happens with older radios or if it’s nowhere to be found. Note that some specialty wiring like the dimmer input wire, a mute input for a GPS system, or a few others may use custom colors that only that car radio brand uses.

Not to worry though as those you won’t normally need to bother with just to test and check out a radio.

Note: Standard car stereo wiring colors are used by many but not all manufacturers. It’s always best to double-check to avoid any problems. 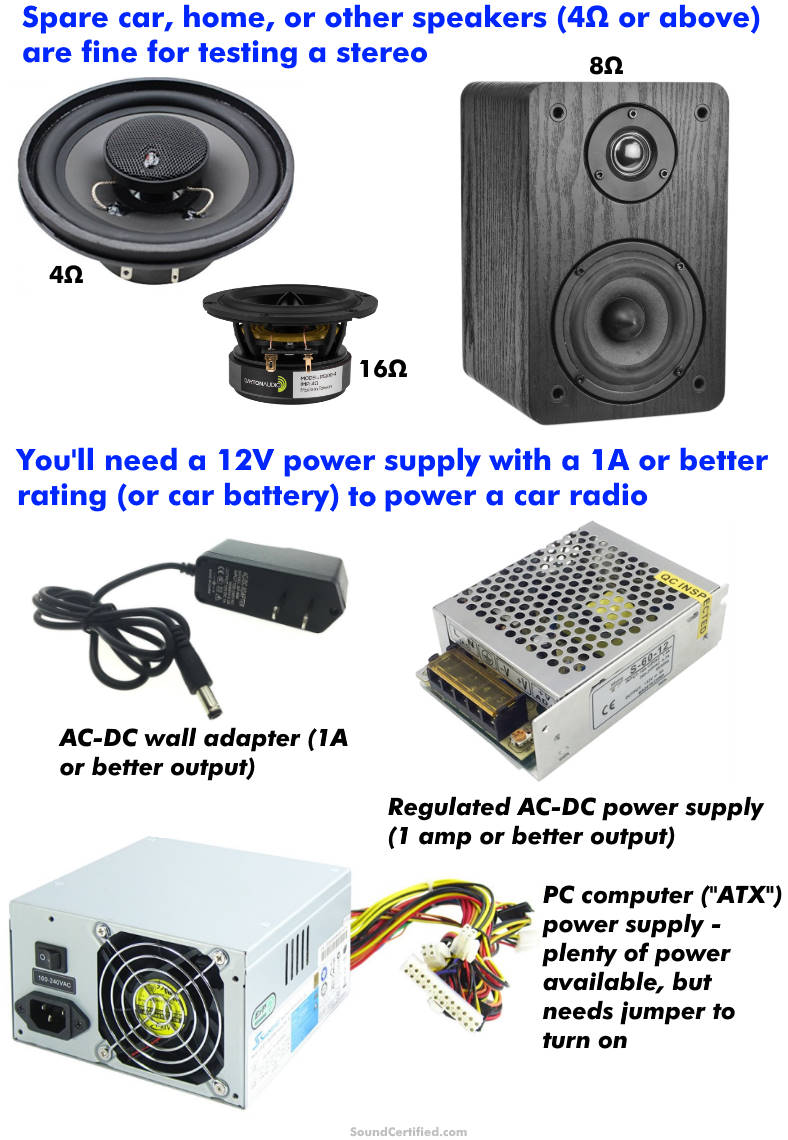 The good news is that it’s actually pretty simple to get what you need together for testing a car radio. What’s great is that you’ll only need a few parts to get the job done:

Note that while most car stereos use 4Ω speakers, there’s no harm in using a higher impedance (higher Ohm) rating speaker for test purposes.  Any speaker that’s 4Ω or higher will work.

You wouldn’t want to higher impedance speakers every day in your vehicle for the reasons I explain here, but when just checking the speaker outputs anything handy will do.

The main thing is to use a speaker you know for 100% sure is working. Don’t guess – be 100% sure your test speaker is good and plays well when connected to a radio or you could mistakenly think your car stereo has a problem when it doesn’t when testing it.

Note that 1 amp is usually enough to power a car head unit just enough for checking the functionality and getting sound with a test speaker. For driving a car radio with higher power output to multiple speakers, you’ll need more current (a higher amp power supply).

How to test a car radio (diagram and notes)

How to test a car radio

To test a car radio, there are 3 main things you’ll need to do:

1. Connecting power to the radio

As I mentioned earlier, you can use a +12V to 13.8V DC power supply for your car radio. Optionally, if you don’t have a 12V supply you can temporarily connect it to a 12V car battery long enough to check out the radio.

In either case, you’ll need to do the following:

The red wire, “ACC” is a +12V input that signals the car stereo to switch on with the ignition, while the yellow “BATT” wire is the main power source. The ACC wire must have power for the radio to work.

Be sure to insulate any unused exposed wires including the speaker wires (more about those later). You don’t want any wires shorting together during testing. For insulating them, electrical tape works great or you can use duct tape or even masking tape carefully if you must. I’d avoid transparent Scotch tape as it tends to come off too easily.

The idea for testing is to temporarily do what you need to for checking that it works. For a real vehicle installation, better connections like crimp connectors should be used.

CAUTION: If using a vehicle battery to power you radio under test, never allow the metal case of the radio near the battery. The metal body is grounded and could cause a dangerous short ciruit if it were to touch a positive wire or terminal. 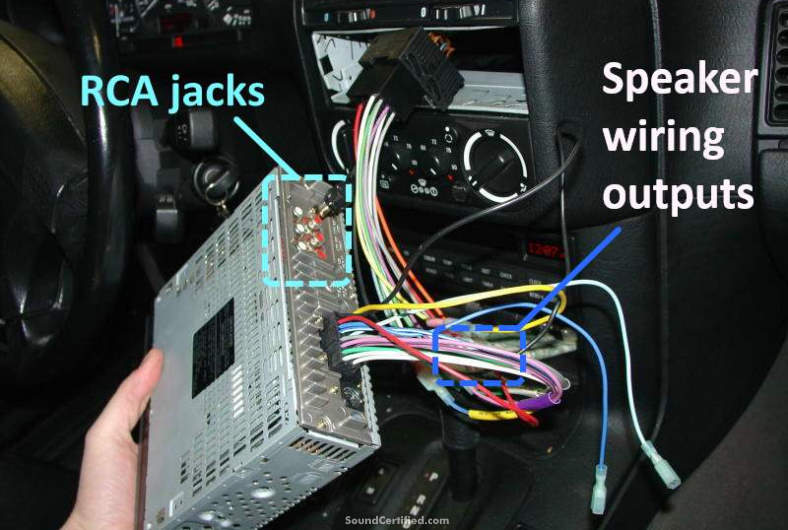 Most car stereos use an internal amplifier integrated circuit (IC) chip to provide the power to drive speakers in a vehicle via the speaker wire outputs. Bad speaker outputs due to improper installation (short circuits, low speaker impedance, etc) are a common problem with used car radios.

It’s important to check these and make sure they’re working as expected before bothering to install it. To do so, you can use a test speaker as mentioned earlier with an impedance of 4Ω or above. Even a 6, 8, or even 12Ω speaker you’ve got at home works great for this!

To test the speaker outputs:

Note that of all the car radios I’ve tested, it’s not unusual to run across used radios that have no audio from the speaker wiring. 9 times out of 10 this is due to a poor-quality installation where the wires were allowed to touch, someone trying to “get more power” by wiring it the wrong way, or using the wrong impedance (Ohms) speakers.

When a car stereo’s amplifier chip is damaged, it’s permanent and the output transistors fail, no longer able to produce a musical signal. There’s no solution for this outside of paying for a manufacturer repair or just replacing it.

Note: The good news is that generally you shouldn’t need to test RCA jack, if present, on your car radio. These rarely if at all fail. Speaker wiring outputs are the main concern. 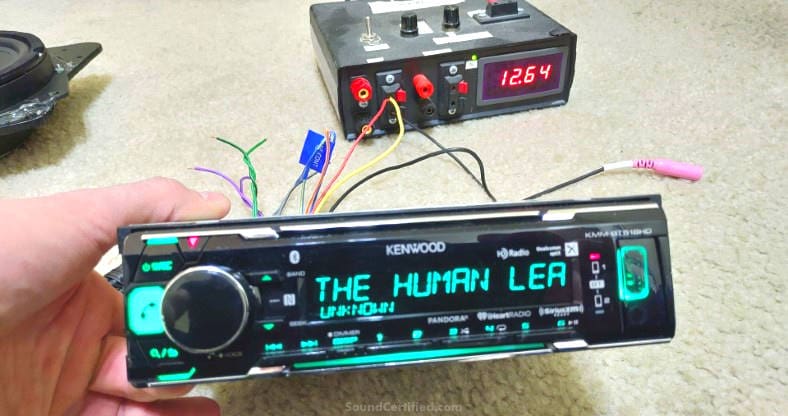 Be sure to test the other functions you’ll use the car radio for: USB audio, CDs, HD radio, Bluetooth, phone direct control (USB cable connection), or others.

Finally, if the speaker outputs appear to be good to go, you’ll want to be sure to check the other main audio functions you’ll be using regularly:

Also, always be sure to try out most of the buttons to make sure they work properly and aren’t worn out.

Rotary volume controls should have a good feel to them and the volume should adjust up or down without a problem. Buttons also should have a good “feel” and shouldn’t be stuck, fail to respond (a sign of a worn-out button switch), or do nothing.

If one or more buttons don’t work or seem right, that’s a red flag that the car radio has either been abused and may not last too much longer. Faceplates can be replaced for brand name head units, but you can expect to spend $50 or more easily for a replacement if you can find one!

One big sign of a car head unit with a ton of use (and wear) is that the printed labels are worn off or show signs of wear already.

How do you hook up a power supply to a car radio?

As I mentioned in the beginning, you can use a PC computer “ATX” power supply you have handy to power a car stereo for testing. It’s not that hard as you only need a few steps:

Of course, you can use only one +12V wire from the supply and connect it to both the radio’s ACC and battery wires together if you like. Once power is connected to the radio, connect the “supply on” wire in the diagram to another ground wire as shown. The supply should start and your car radio should turn on.

Note that some car stereos are switched off by default when they’re first connected to power so you may need to check the power button.

NOTE: Switching off the power supply will cause the radio to lose its “memory” (settings, last station you played, etc) so you may find it easier to use the radio’s power on/off button until you’re finished testing it.

What if my car stereo isn’t working right? 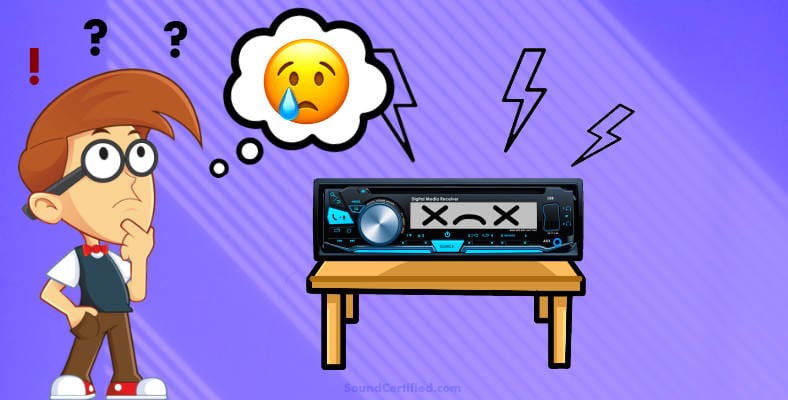 I’ve seen some odd problems with used car stereos over the years. It tends to be the same group of problems over and over again – sadly, in a lot of cases, it’s not economical or practical to deal with the headaches.

There are always exceptions, but these tend to be some of the most common problems you’ll find when testing car stereos. Thankfully, more and more sold these days use fewer mechanical parts so they’re less likely to have the same problem (aside from wear and tear of the buttons).

If after testing you discover your car stereo isn’t working right and has some issues (especially if there’s no sound from the speaker outputs) my advice is to move on and get a nice condition replacement with modern features.

For under $100 these days you can get excellent sound, features, and customization that didn’t exist a few years ago. It’s not worth the headache of trying to deal with a broken car stereo in most cases (unless it’s vintage and rare items).

◀ PREVIOUS: How to hook up a car stereo to AC power
NEXT: The best place to buy a car stereo ▶
Leave a Comment Cancel reply