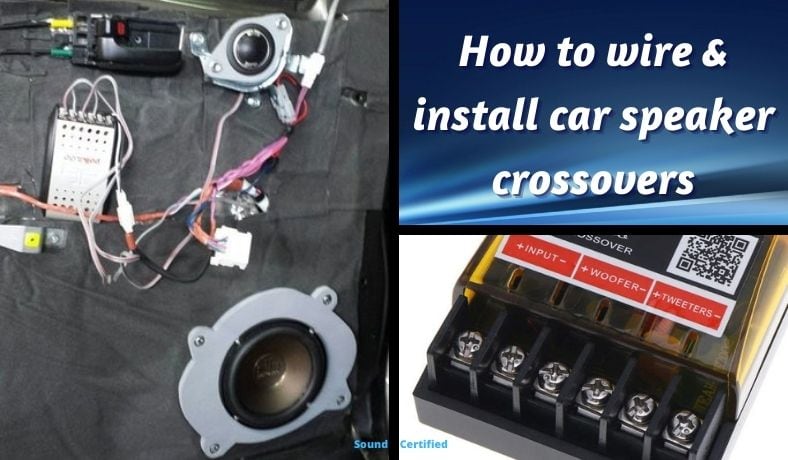 If you want more power & volume, less distortion, or simply to enjoy your music with better sound, you’re going to need to know how to connect speaker crossovers. I’d love to help!

In this article, I’ll cover how to install and wire car speaker crossovers with great results.

Here’s what you’ll find inside:

There’s a lot to cover so let’s get started!

How to wire car speaker crossovers (diagram and info)

How-to and tips for wiring car speakers to crossovers

In order to correctly wire speaker crossovers, you’ll want to do the following:

Crossovers are normally marked with the correct speaker wire polarity to connect to as well as which speaker you should connect. Often you’ll find an abbreviation like “TW” for the tweeter and “Wf” or “Md” for woofers and midrange/midbass speakers.

Do crossovers have to be wired close to speakers? 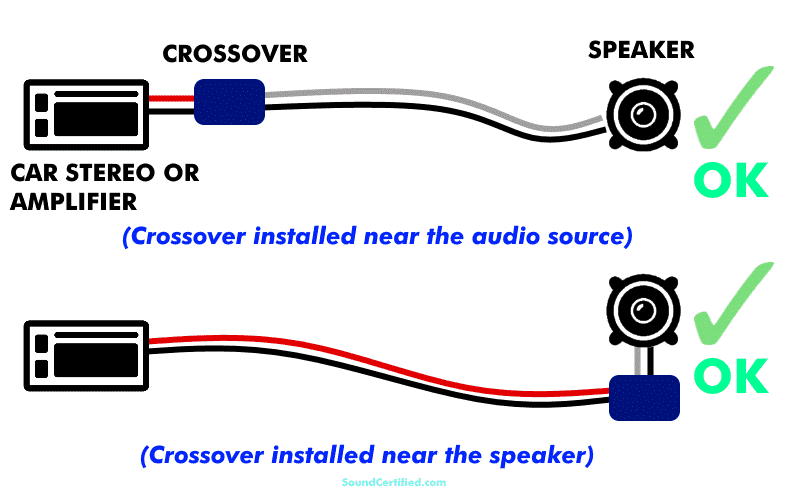 You can install & wire speaker crossover close to the amp or car radio. They don’t have to be installed close to the speakers.

The good news is that yes, you can wire speaker crossovers close to your amp or car stereo if it’s less work. While it’s usually easier to do it where the speakers are when upgrading factory 2-way component speaker systems (since they’re often close to each other in the doors, for example), it’s not important. 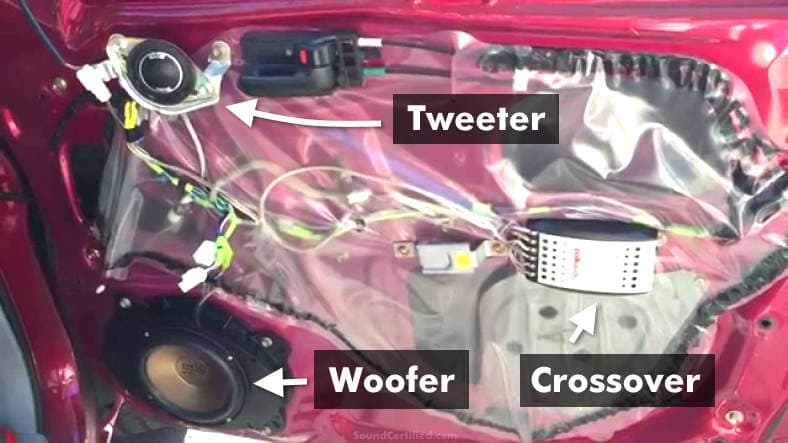 It’s generally easier to put a crossover near the component speakers when upgrading (or adding your own) 2-way speaker systems. However, there’s no reason you have to most of the time. When it’s convenient, you might find it helpful to keep the crossover closer to the car stereo or amp, saving the need to do more work or run new speaker wire to go to it.

For example, if you’re upgrading factory-installed tweeters but don’t want to have to hunt down and modify the factory wiring, normally it would require running new speaker wire to them. Instead, you can avoid all that time & headache by wiring them inline behind the head unit, then connecting the new tweeters in place of the old ones.

As long as the speaker wiring is reasonably short (less than 50 feet for each speaker, for example), in the real world it’s not a problem. This is especially helpful for situations like adding bass blockers (inline high-pass crossovers) from an amp to your main speakers.

Just be aware that some vehicles may have factory crossovers installed on the speaker itself (very common for factory tweeters) or somewhere else in the speaker system. It pays to be sure before connecting your own.

Once you’ve wired your speaker crossovers, you’ll want to make sure they’re installed and mounted securely. That avoids a lot of problems with them bouncing around and even potentially having a short-circuit if the terminals come close to metal.

As you can see from the diagram above, I’ve provided 2 practical ways: 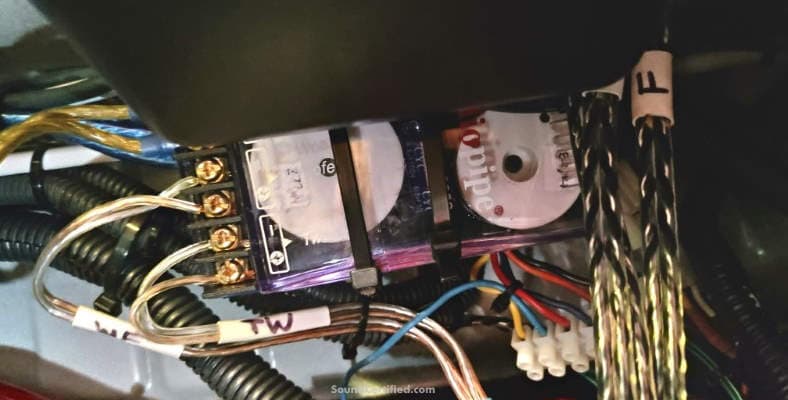 Shown: an example of how I used wire ties to mount a 2-way speaker crossover to the car’s wiring harnesses in the trunk. It’s not “fancy” looking, but still one of the easiest – and best – ways to install crossovers with a lot less hassle.

If you’ve ever bought wire ties you may have noticed that they’re often way too short to wrap around speaker installation parts. One of the installation tricks I use to solve this is by connecting wire ties to each other end-to-end for extra length.

This way, you can use any wire ties (6″, 8″, and other standard lengths stores may have) to get the job done.

Installer tip: Be sure to get enough wire ties before starting your installation! I recommend buying a standard pack of at least 100 6″ or 8″ zip ties. However, my advice is to buy extra. Having 200 or more is much better especially as you’ll have enough to neaten up your bundled amp or speaker wire runs.

I don’t recommend you bother with the small packs of 25 – 50 or so as you’ll run out of them quickly.

How to wire tweeters with built-in crossovers to speaker crossovers

What about using different tweeters with an existing component set or making your own component speaker set using some speakers & crossovers you bought.

The good news is that in most cases if the tweeter impedance matches that of the 2-way crossover this can work.

However, the most important thing here is that you don’t use the built-in tweeter crossovers. You’ll have to remove and/or bypass those.

Generally speaking, most add-on tweeters have one of 3 kinds of built-in or external crossover:

For #2 & #3, you’ll just need to either bypass it and connect the tweeter to speaker wiring & the crossover directly. Case #1 is a bit trickier. You’ll need to either remove the capacitor and solder the speaker wire to the positive tweeter terminal, bypassing it, or solder a jumper wire around it.

Soldering a jumper wire around it will act as a short and the capacitor will no longer be seen by the crossover you’d like to use.

Note that you shouldn’t use existing crossovers on speakers when connecting them to a new crossover. The crossover you’d like to use will behave differently and the sound won’t be correct. (The crossover frequency can change and other kinds of problems pop up)

As I showed earlier, crossovers are based on parts (capacitors and inductors) that work as filters according to the speaker load they’re connected to. Because of this, when you change the speaker impedance you change the crossover frequency and the sound.

You’ll likely notice some sound problems if you do it:

What happens to a crossover when I halve the speaker impedance?

We don’t want this because it allows the wrong range of sound frequencies to pass to the speakers. In the case of tweeters, bass & midrange are bad because they can’t produce it properly. In fact, after a certain power level tweeters can be damaged when driven hard by bass frequencies.

◀ PREVIOUS: How to determine speaker crossover frequency
NEXT: What happens if I use a different impedance speaker on a crossover? ▶
Your comments are welcome.
Leave a Comment Cancel reply