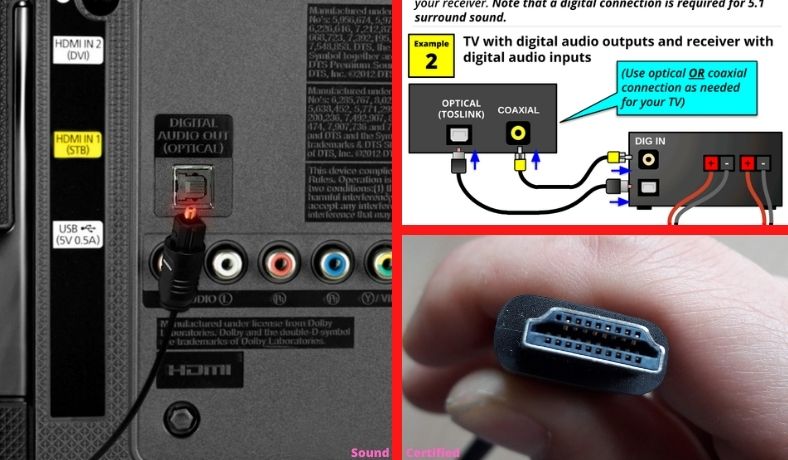 Want great TV or cable box sound from your audio system, but your receiver doesn’t have an HDMI port? Great news – there are other ways to do it.

In this article you’ll find a ton of great info:

This article is part of the AV receiver main page. 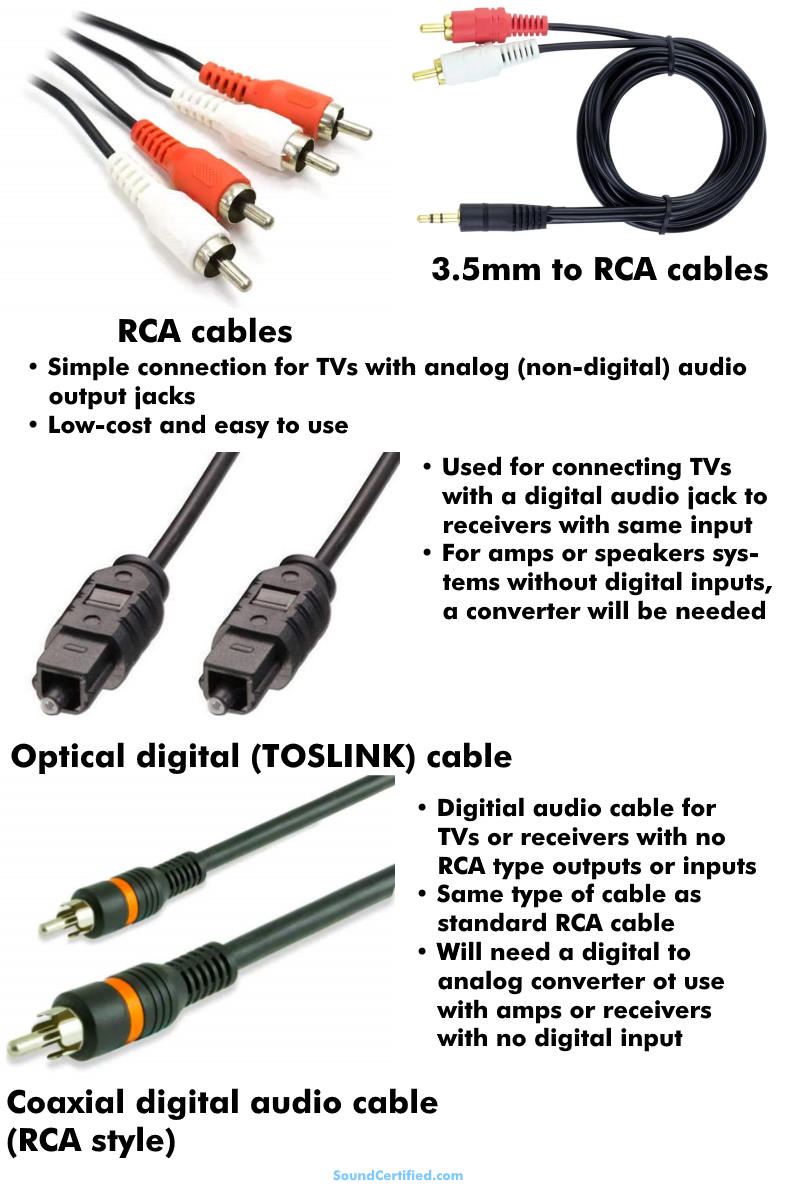 The cables you’ll need to have will depend on your receiver’s available inputs and the converter (if any) you need to use. There’s no standard set of audio output jacks for TVs, so it can be just one or a combination of several. 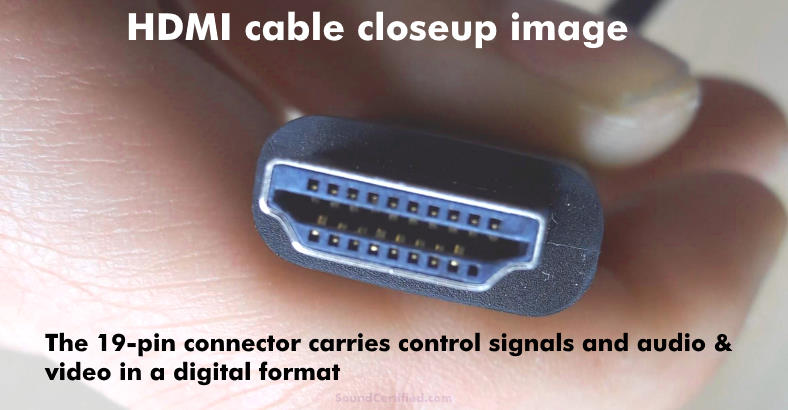 The connectors listed above apply to both a standard or a smart TV – it always depends on the particular model.

The High Definition Multimedia Interface (HDMI) standard has been on the consumer electronics market for around 15 years now. It’s evolved a bit, becoming more flexible and yes – unfortunately – a bit complicated to understand sometimes.

The good news is that since HDMI ARC has been around since 2009 it’s most likely what kind of output your TV or other devices have. It also means you’ll have a great option for a receiver/home theater system without an HDMI input jack as you’ll see.

As you see later, an HDMI audio extractor (adapter) will make getting sound possible – and it’s affordable, too.

Digital outputs work by transmitting audio represented in digital format made up of bits of information. Newer AV receivers with these types of inputs can decode the digital signal back to sound and amplify it to drive speakers.

An older receiver or a standard home stereo amplifier cannot and you’ll likely need a digital to analog (RCA) converter box to do the job, as they provide an RCA compatible output pair.

Analog jacks are a non-digital output that can be amplified to drive speakers by any compatible receiver or amp with auxiliary, DVD, or CD inputs. You can also use self-powered speakers with analog outputs.

How to connect a TV to a receiver without HDMI

The type of connection you’ll need will depend on your particular TV. Older receivers often have auxiliary (AUX) RCA input jacks with one or more labels:

Input jacks like these were used years ago playing audio from a separate audio source through the receiver and will work fine for TV sound with the right connection. (You can also connect sound from an external media player or Blu Ray player for example if you like.)

They’re the same thing as both accept a low-level signal (line level) signal to be amplified by the receiver in the right mode and sent to the speakers.

As I mentioned earlier, there are two main types of TV sound connections you’ll use: 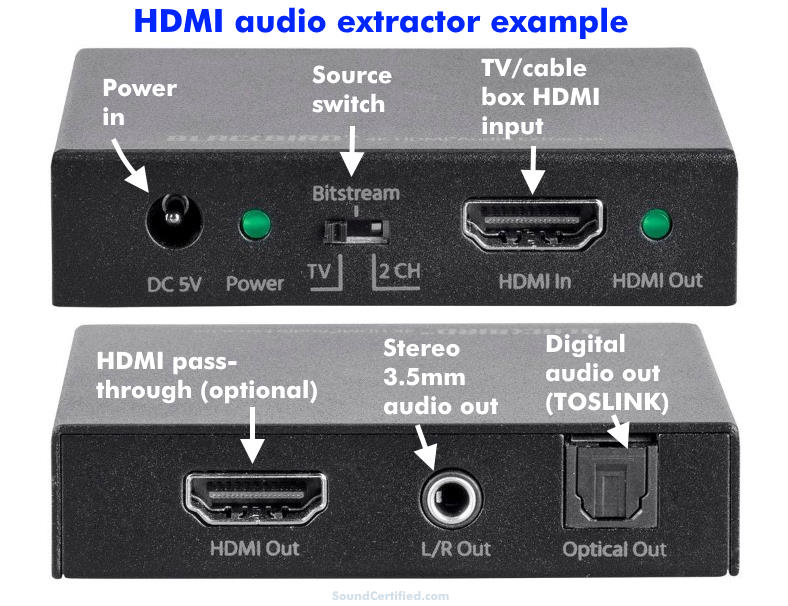 An HDMI audio extractor is a device that removes the digital sound source from an HDMI output or other device and provides digital or analog outputs. Plug in the HDMI connection then you can connect to nearly any non-HDMI receiver or amplifier with compatible inputs via an optical audio cable or RCA connectors.

A good audio extractor is about only $25-$50 and can even support 5.1 support sound for home theater systems that can have the feature. Note that the HDMI cable is often separate, but those cost just a few dollars.

NOTE: Although connecting an RCA cable is easy, for best results (or to take advantage of surround sound) you’ll want to use the optical or coaxial digital jack connection.

If your TV, cable box, or other sound source doesn’t have ARC a second option is to connect to the digital outputs, if provided. There are two reasons to use a digital connection if your receiver supports it instead of analog:

Either an optical or coaxial digital connection will be fine, although a TOSLINK optical cable will avoid electrical interference or ground loops since it will isolate the electrical ground connections. A digital optical cable costs just a few dollars online so it’s affordable, too!

One thing to know is that fiber optic cables can be damaged if bent too much so you’ll need to be careful to avoid kinking them or crushing them in tight spaces. Doing so can damage the internal material, causing them to fail to carry the signal properly.

3. Connecting a TV to a receiver using analog jacks

A third option, this is normally very easy although you may need to turn on audio outputs in the menu on some TVs to get sound.

Simply connect whichever available outputs you have to the auxiliary, DVD, CD etc. inputs on your receiver. This is a great budget option because you can use a cheap RCA cable as it will work fine for good sound.

Tip: some TVs have a headphone size jack in which case you can use a 1/8″ (3.5mm) plug to RCA jack adapter. You can then connect any RCA cable pair between the TV and the AV receiver. 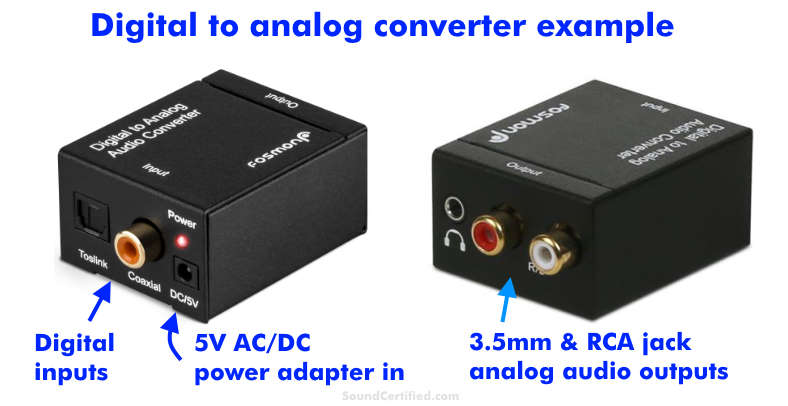 Digital to analog converters accept a digital signal that can’t be used with powered speakers or an amplifier and convert the digital signal to a stereo output. RCA and/or 3.5mm (1/8″ headphone) jacks are provided.

This is a bit trickier because you’ll have to convert the digital audio signal, not just connect it. You’ll need to pick up a digital to RCA converter. These cost about $18-$25 and usually include a small AC-DC power supply.

Some do or do not include the cables needed to connect to your television (many do include it) so you’ll simply use whichever option you have: the optical (TOSLINK, fiber optic) jack or the coaxial digital jack.

Note: When using your AV receiver to play the TV sound through your receiver’s speakers, be sure to disable or turn off the volume to the internal TV speakers if it has the option. Otherwise, the TV speakers will conflict with your better speakers, resulting in poor & distracting sound. Use only the stereo speakers when possible.

Can I listen to my TV in surround sound on a receiver without HDMI? 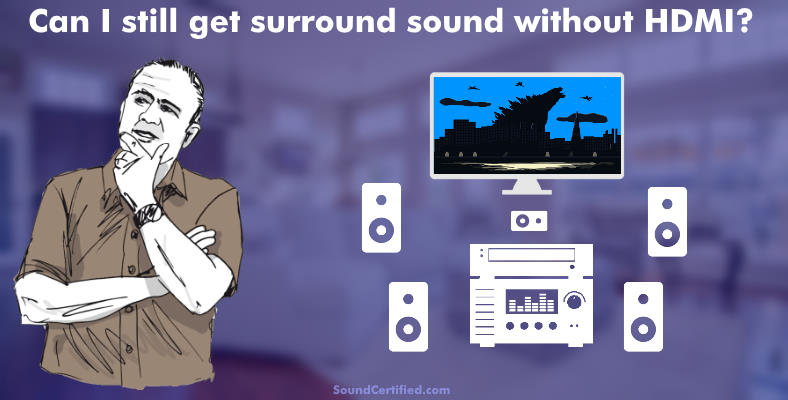 The short answer is maybe – it depends on two things:

Unfortunately many televisions usually “downmix” (convert) the 5.1 audio stream to a 2 channel output. In some cases there’s an option in the TV settings to enable a full 5.1 passthrough connection, sometimes called “LPCM.”

However, there’s no guarantee and frustratingly, TV manufacturers don’t always do a good job of making this clear. Generally you can be pretty confident about surround support over HDMI these days but it’s a bit of a gray area.

In some cases you might want to pick up a streaming media device such as an Amazon Firestick or others which do include surround sound output. Any receiver with Dolby Digital or DTS and a digital input can work with those.

One worst-case scenario can help sometimes. If your TV doesn’t offer 5.1 support, you can use the Dolby Pro Logic feature that nearly all receivers with Dolby Digital decoding provide as a backwards compatible feature.

Dolby Pro Logic I/II was one of the first surround formats and only requires a 2-channel signal source. It can also simulate surround sound from any 2-channel movie or music, meaning you can take advantage of your surround sound system speakers. It’s an option worth trying out.