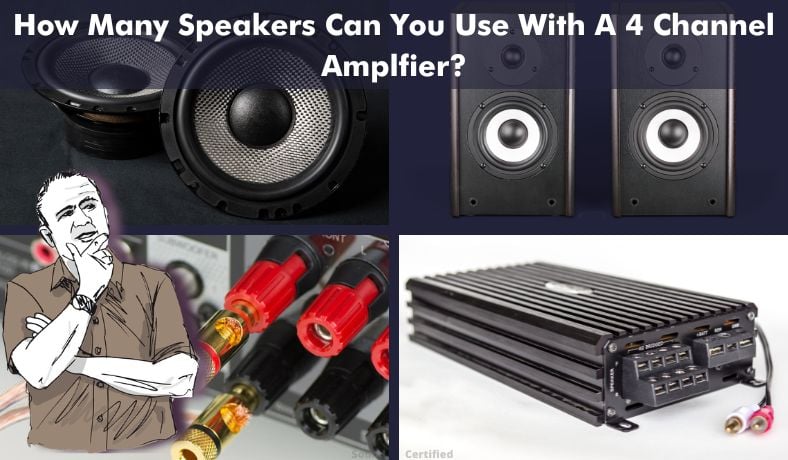 Welcome! In this article, I’ll help you connect multiple speakers to 4 channel amps, whether for home audio, car audio, or general speaker system use.

I’ve created some helpful diagrams as well to help you.

How many speakers can you connect to a 4 channel amp? 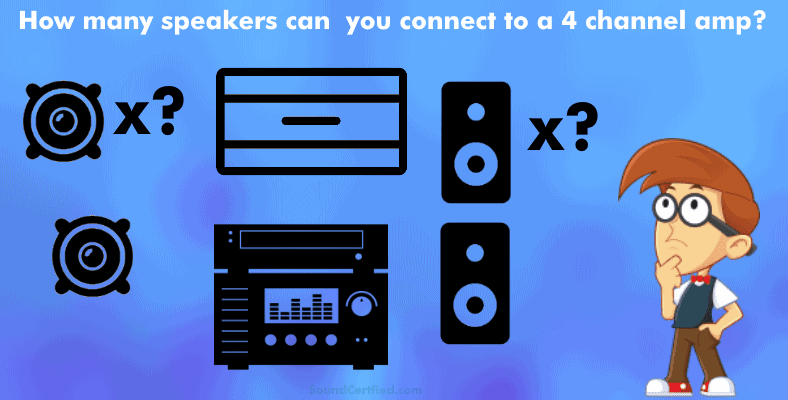 The number of speakers you can use with a 4 channel amp depends on several things, but the short answers are:

However, it comes with a price. That’s the case because each speaker will get a portion of the amp’s power output at the total Ohms load you use. This means that you must remember that the speakers will share the available power whenever more than one speaker is connected.

This will also affect the maximum volume possible for each speaker since less power will be available. The more amplifier channels available, the better, for this reason.

NOTE: You may have noticed the number of speakers per channel I’ve listed above even (2, 4, 8, etc.). That’s because the total Ohms will work out to the best compromise in that case. Odd numbers of speakers can be used, but one or more speakers will receive an uneven amount of power versus the others, so I won’t cover those cases here. 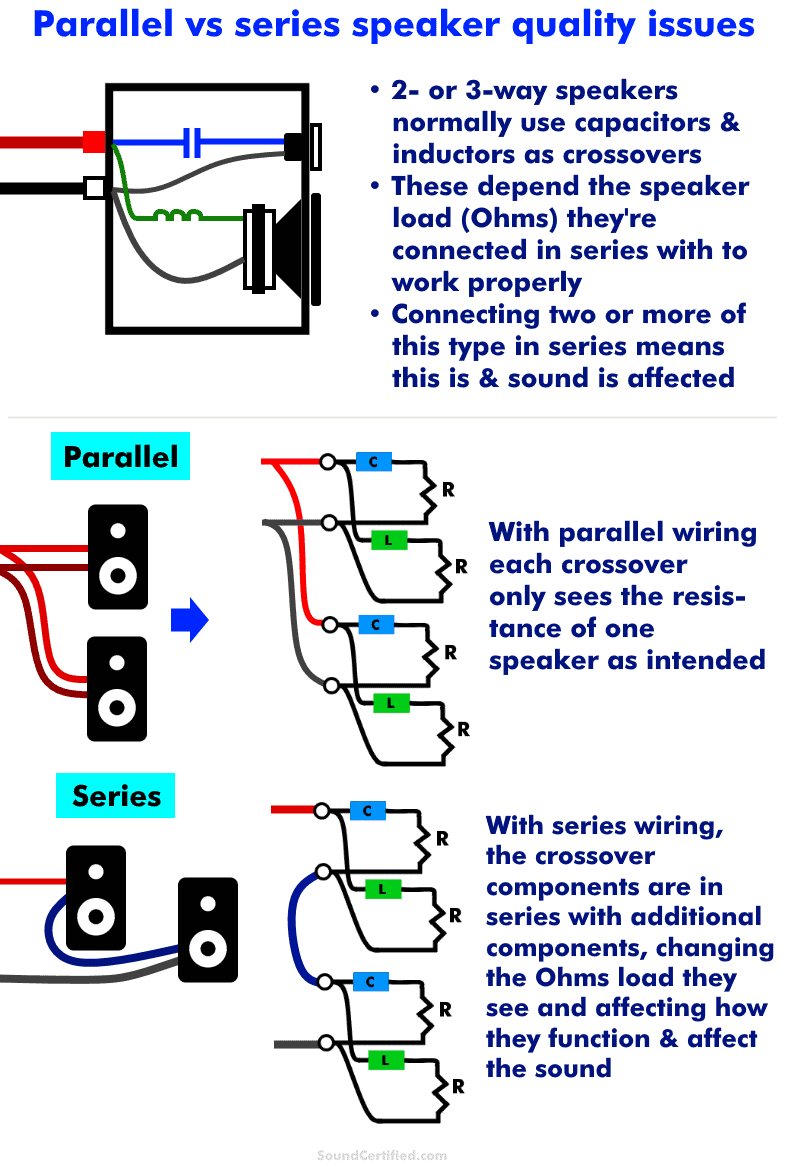 Unlike single cone speakers,  2-way or coaxial speakers use a speaker crossover to filter sound directed to the tweeter and/or woofer. A speaker crossover’s cutoff frequency (crossover frequency) depends directly on the speaker Ohms it is connected to.

When multiple speakers with an inline crossover (such as car tweeters or 2-way home stereo speakers) are connected in series this can affect the sound.

That’s because crossover components (capacitors and inductors) expect a specific speaker Ohm load based on their design. When more speakers are added in series, this increases the speaker impedance (the speaker’s resistance to current flow, in Ohms) they see. This causes the crossover frequency to shift, allowing unintended sound frequencies to pass.

Connecting crossover components in series (inductors and capacitors) causes them to interact with each other which can cause issues. Lots of things in the music you hear like bass and treble or the range of sound they produce can be negatively affected.

It’s something to bear in mind when you want to connect multiple speakers. Technically speaking, it will work and provide sound, but it’s not what you’ll want for the best sound possible. It’s not a problem with multiple subwoofers, however, aside from making sure they have enough power.

What does a speaker impedance adapter do? 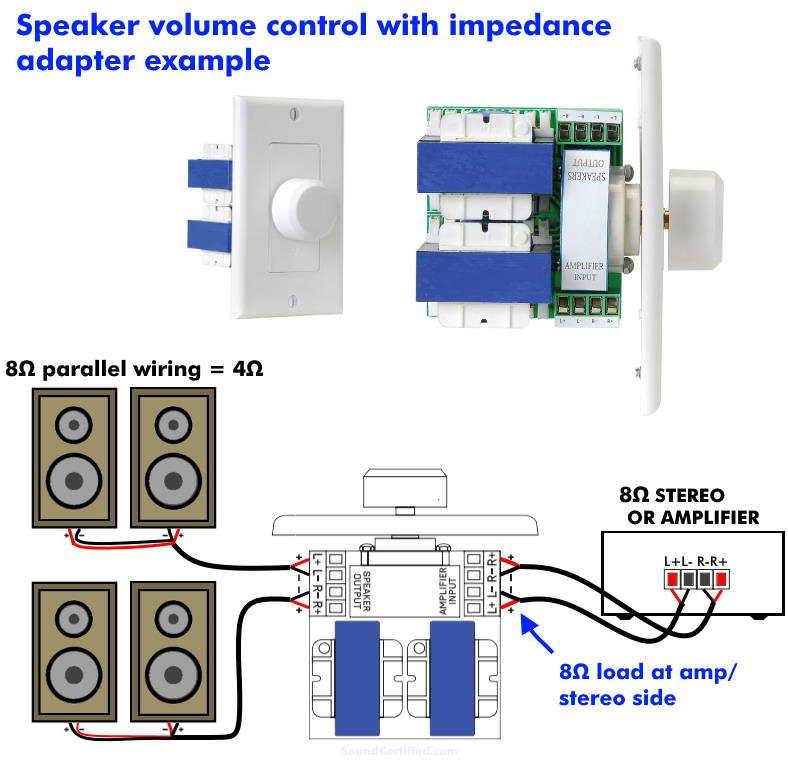 A speaker impedance adapter allows you to safely wire speakers, connected to its output side, in parallel for best sound quality and power to each. The amplifier, stereo, or AV receiver will “see” the correct and safe total speaker Ohms load on the speaker terminal side thanks to small electromagnetic transformers used in them and configured for your speaker system.

The transformers use a step-up or step-down voltage scaling property, much like a power adapter in your home, to change the output applied to the speakers. The end solution provided is that rather than having two speakers in parallel lower the speaker Ohms to a level that could damage the speaker’s output electronics, it will instead present the expected Ohms load.

Depending on the model and options, some provide additional flexibility such as using 4 ohm, 6 ohm, or even 2 ohm speakers with an 8 ohm amp and vice versa. They’re also convenient when using an additional speaker pair in your backyard or pool via a speaker selector switch.

In fact, even though they’re sold for home stereo use, many will work fine with a car head unit or amplifier in your vehicle as well!

Choose a diagram based on the minimum Ohms per channel your amplifier is rated for. This should be listed in the specifications and at the speaker terminals in many cases.

Can you use 6 speakers with a 4 channel amp?

Yes, in many cases you can power 6 speakers with a 4 channel amp directly. In other cases you can use a speaker impedance adapter to connect additional speakers that otherwise would not work well.

The connection and wiring setup you can use depends on several things:

In the diagram above, I’ve provided several example setups which are safe to use via the rear speaker outputs of an amp. The additional pairs can be wired in parallel in some cases directly but not in all (hence the need for speaker Ohms impedance adapters in some cases).

Note that in cases where wiring two speakers in parallel would still be supported by the amp’s minimum Ohms rating, single cone speakers would work fine without sound issues due to crossovers. In that case an impedance adapter is not required or recommended.

◀ PREVIOUS: What are the 4 types of speakers?
NEXT: Do outdoor speakers need a receiver? ▶